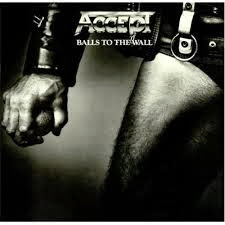 As the Wild Wagener Week continues I thought I would take a moment and write a moment on a very special album in my collection, Accept’s Balls To The Wall. Let me first take rewind just a little bit.

Back in 1984 I was a young teenager quickly discovering my own musical tastes and much to my parents dismay, these tastes were forging heavier and heavier. As a young child I was introduced to KISS but as an only child my pre-teen years were mostly spent listening to the music of my parents. Def Leppard and Quiet Riot quickly changed all that and by the spring of 1984 I was hungrily devouring any new heavy metal band that came into my vicinity.

June 1984, I got tickets to my first ever rock concert. Emblazoned on my ticket stub was MOTLEY CRUE/SAXON and for weeks prior I was worse than a kid at Christmas, counting down the sleeps until I could see LA’s bad boys tearing it up live. Saxon, we really didn’t know at the time. If they weren’t getting radio play or video play on our Canadian stations so Saxon was a bit of a mystery to us as we set out for the big city on the day of the show.

My friends and I were so excited as we pulled into Toronto’s CNE grounds and noticed the marquee. Tonight – MOTLEY CRUE/ACCEPT. Accept? What the hell happened? Our ticket clearly read SAXON as the opening act. This however, was not a bad thing as unlike Saxon, we knew who Accept were and were very familiar with the video for “Balls To The Wall”. If I remember correctly some high fives were traded as anticipation grew awaiting the big moment. 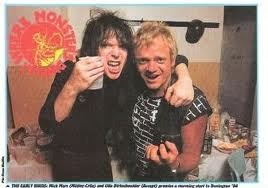 Once in our seats it was soon showtime. I don’t remember exactly what song ACCEPT started with but I remember how loud it was. At the expense of looking totally uncool, I almost covered my ears as the sonic metal assault shocked my eardrums into submission. Before long though we were rocking and banging our heads. Balls to the Wall closed out the performance and by then we were completely sold, I knew exactly what my next album purchase was going to be.

In 1984 Heavy Metal was yet to be segmented into the multitude of genres and sub-genres. Hair metal, pop metal, thrash metal, glam metal, speed metal, death metal, doom metal, it was all under the term Heavy Metal. Judas Priest, Motorhead and Def Leppard, hell even Bon Jovi for a moment were all considered “Heavy Metal”. Personally for me, classic Heavy Metal will always remind me of Priest, Sabbath, Maiden. Accept’s Balls To The Wall album perfectly encompasses what I consider that classic “heavy metal” sound. 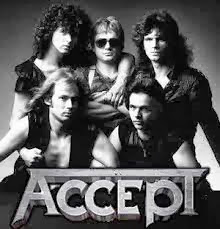 Opening with the title track the album rips in with hard, crunching guitars and a groove that almost forces you to bang your head. From top to bottom the album provides big distorted guitar riffs played clear and true, huge bottom end and a voice so unique and so metal that once you hear it you’ll never forget it. UDO could probably peel paint off the wall when he lets loose and his scream at 1:10 of “Fight it Back” sounds almost inhumane. As heavy as it is, there is still a ton of melody that holds the songs together with almost a classical influence.

For anyone wanting to listen to a complete 100% pure “Metal” album, Balls To The Wall would certainly rank among the best in song strength, performance and production.