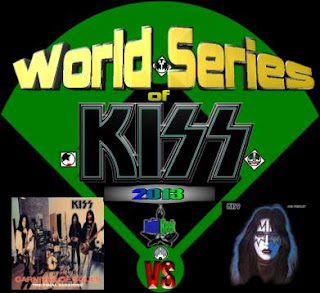 Welcome to KISSMAS IN JULY here at the Decibel Geek Podcast! The “boys of summer” are playing baseball so we decided to put together our own Kiss related “World Series” for your enjoyment. Many hours are spent discussing, debating and defending our favorite Kiss Albums so we decided to use KISSMAS IN JULY as the month to crown the definitive champion Kiss album in the World Series of Kiss.

This is how it all works, each and every Kiss studio album (including the 78 solo records) were written down on equal size paper (so as not to give The Elder any unfair advantage). That’s 24 albums and after a solid shakeup, a totally non-biased human was recruited (my daughter Meagan) drew the albums one at a time calling them out as the matchups took shape.

The winners are determined as our 5 esteemed judges each choose their “personal” favorite album from each match-up. This ensures there is no ties in any round and after round one the winners advance to round two and so on until we crown the 2013 World Series of Kiss Champion as chosen by the Decibel Geek Podcast. Buckle up readers this should be fun.

So enough of the rules it’s time to “PLAY BALL!”

BJ: Hmm, this is what they call a pickle, a real headscratcher: which do I prefer, my least favorite Kiss album or one of my favorite albums of all time? Ace Frehley’s 1978 solo album is a kickass celebration of rock and roll, masterfully produced by Eddie Kramer. The 1-2 punch of album openers “Rip It Out” and “Speedin’ Back To My Baby” might just be unmatched in the annals of rock. Anton Fig absolutely destroys behind the kit, those maniacal fills that precede the orgasmic guitar solo in “Rip It Out” make me far happier than any drums fill should. Ace pulls off power pop with the excellent “What’s On Your Mind” and outdoes British glamsters Hello with his excellent rendition of Russ Ballard’s “New York Groove.” While Ace’s solo album is a truly inspired and creative work, I certainly cannot say the same for Carnival of Souls. With all due respect to those who might like it in my opinion Carnival of Souls is uninspired, soulless garbage. Why would I ever want to listen to Kiss impersonate grunge/alternative? Winner: Ace Frehley 1978

AAron: It’s tough for me to compare COS and the Ace Frehley ’78 solo album, other than the fact that I love both of these albums very much in very different ways. I don’t even really consider the Solo Albums to be KISS albums, so that makes it even more difficult. COS is one of KISS’ heaviest albums, it is also one of their darkest and edgiest. At the time I really appreciated that, especially coming off of the glammy, cheesey albums of the mid-late 80’s. This was an album that a guy who liked Metallica and Overkill, but also loved KISS could be proud of. On the otherhand Ace’s solo is one of the greatest pure guitar albums of all-time. If you love real guitar driven rock, nothing beats this album, including (sadly) Carnival of Souls. Winner: Ace Frehley 1978

Chris: Many fans like to slag Carnival of Souls but it holds a special place in my heart. During the shelved period of 1996, COS was only found online in very crappy bootleg form. Nevertheless, I loved rocking out to some of KISS’ heaviest work. Bear in mind that I truly got into the grunge genre as it was during my high school years. While it was a stab at fitting in with the times, I think KISS succeeded to a point with such great tracks as Hate, Rain, Master & Slave, and Jungle. And I nominate the guitar solo in Seduction of the Innocent as one of the best in the band’s history; yes, I’m being serious.

The Ace Frehley ’78 solo album is, quite possibly, in the Top 5 of greatest things ever released under the KISS moniker. Ace may be the sole KISS member on this album but it’s raucous riffs and melodic, yet-heavy, sound fits in well with the classic material being released by the four-who-are-one at the time. Every track on this album, in my opinion, is a winner. Highlights for me are Rip it Out, Speedin’ Back to My Baby (sounded awesome on the Bad Boys tour in ’95), and the jangly-guitar of What’s on Your Mind. Nevermind the huge hit that was New York Groove and the awesome Fractured Mirror instrumental. Seriously, not only a great KISS record but one of the greatest hard rock records of the 1970’s. Winner: Ace Frehley 1978

Rich: For me this choice was so very simple.  First of all, I am a KISS fan with no questions about it.  I may not know every in depth detail about the band (I’ve learned a ton from Chris and Aaron), but they were the first band that I followed as a kid, loving the make-up and personas as well as the music.  I even, as I’m sure did many of us, dressed up at Halloween.  I may complain about “my band”, I may not always agree with their decisions, but I am a fan all the way, if they barfed on a record I would buy it because it’s KISS!  Gene and Paul have enough of my money to pay my mortgage, but even though I may bitch about it, I’ll be there to fork over more for the next piece of merchandise.  That being said, I decide a good album by how much I want to listen to it.  I don’t play an instrument, so for the most part the playing or song writing skills are lost on me and I judge on my listening enjoyment alone.  When I discovered the release of Carnival of Souls I purchased it right away and gave it one listen, not even getting all the way through, the first KISS record to have this effect on me and I was disappointed.  A few songs from Ace’s solo (while not my favourite solo album even) tend to make their way onto playlists from time to time and Rip It Out was something that I played down in the basement over and over again, jumping around with my air guitar in my younger days.  I did re-listen to both albums in their entirety before writing this, just to refresh my memory and while there are one or two shining moments on Carnival Of Souls, my opinion stays the same……..crap is crap and Carnival of Souls is crap.

If we look at it in terms of a 10 goal hockey game (I am Canadian after all…lol) The Meister predicts the scoring outcome would be Ace 10 – Carnival of Souls 0. Winner: Ace Frehley 1978

Wally: Round one and I already hate this game (who’s idea was this anyway?). I love Carnival of Souls. I think it got a raw deal as Gene and Paul dove headfirst into the sea of reunion money and Bruce and Eric were left holding a very unique and heavy Kiss record that totally got lost in the hype and excitement of the return of makeup Kiss. Lyrically it was certainly a strange album for Kiss but musically there was some amazing playing on this album and both Gene and Paul seemed to be delivering strong material. Jungle is outstanding, Hate could be Unholy’s sister song. Yes it’s dark, yes it’s gloomy and that is not normally the characteristics of a KISS record but that doesn’t make it a bad album. I would have loved to see what that tour might have looked like had they stayed on that path.

Once again Ca
rnival of Souls pulls the bad timing card as it finds itself up against Ace Frehley’s 1978 solo album. Ace delivered in my opinion by far the strongest of the solo albums. From start to finish this album seriously rocks. Hell, Rip it Out could be his best song ever. It was interesting, when I decided to include the solo albums as part of the World Series of Kiss I wasn’t sure how they would hold up but there you go. Ace Frehley walks to the plate, bat in hand and hits this one out of the park. Winner: Ace Frehley 1978