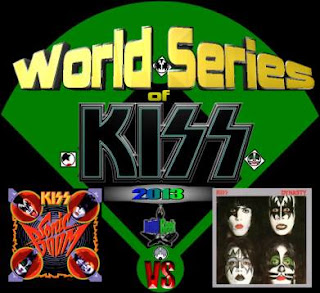 BJ: I think Dynasty is a strong album, I like every song except Dirty’ Livin. My favorite song on the album is Sure Know Something but Ace brought his A game, all three of his contributions are great. Gene only contributes two songs but they are both decent. I don’t have a problem with I Was Made For Lovin’ You or the production on the record. Side Two of Dynasty is actually damn good all the way through. As for Sonic Boom, I don’t like it very much. My favorite song on the record is the song Paul wrote but Eric sings, All For The Glory. Some of the other songs are okay but they lack that spark. This was an easy choice for me, Dynasty all the way. Winner: Dynasty

AAron: Dynasty Vs. Sonic Boom? Both great albums. Very hard to choose. The Ace tunes on Dynasty puts it over the top for me. Winner: Dynasty

Rich: While this battle is a hands down, no questions asked easy decision for me, my choice here may surprise my fellow Decibel Geek judges.  Dynasty, Dynastyand Dynastyall the way!  While the band has been lambasted for I Was Made For Lovin’ You, it’s not that bad of a song and sounds great live (check out Alive III) and while it’s certainly not the highest on my KISSlist, I love the rest of the record.  I bought it at a garage sale for $0.50 when I was a kid and spun it often in my basement.  With great tracks like Peter’s Dirty Livin’, Paul’s Magic Touch, Ace’s Hard Times and Save Your Love, Gene’s X-Ray Eyes and one of my all time favourite KISS songs Charisma.  Dynasty is overall a fun record and an enjoyable listen.  Sonic Boom however came home with me and received one listen before being shelved.  While this CD was being heralded as a return to the Revenge era sound and Modern Day Delilah hit the radio airwaves, I just didn’t hear it and I believed (until Monster) that my band had had its day (a long one at that) and should just pack it in.

If we look at it in terms of a 10 goal hockey game (I am Canadian after all…lol) The Meister predicts the scoring outcome would be Dynasty 9 – Sonic Boom 1. Winner: Dynasty
Chris: A true no-brainer for me.
After becoming a KISS fan in the Crazy Nights era, I quickly went to the used record shop here in Nashville to start building my KISS collection. My first two purchases were the cassette tapes of Ace Frehley and Dynasty. After hearing a few seconds of ‘I Was Made for Lovin’ You’ I hit the SKIP button due to my distaste for its disco sound. When the opening chords of 2000 Man started up with that metronome-like bass drum beat, it helped solidify my KISS fandom. Already wowed by Ace’s solo album, this song made me a huge fan of his. I was also very much taken by his other contributions as well as ‘Charisma’ and ‘Magic Touch’. Anyone that calls this a “disco” album, needs their head examined. It’s an amazing rock record with seriously strong songwriting.
When Sonic Boom hit the Walmart shelves in 2009, I was very excited. The pre-release hype from the band helped to build anticipation. I spent a lot of time with this album on release day and really loved it at the time. Unfortunately, it hasn’t held up quite as well as I remember it. Certain songs like ‘Yes I Know,’ ‘Hot and Cold’ and ‘Modern Day Delilah’ still give me a charge but there’s some real cringe worthy filler on this record; mostly in the lyrical department. The lyrics to certain songs like ‘Stand’, ‘All for the Glory’, and ‘Danger Us’ stand out as particularly cheesy. At least they’re not singing about logs going into fireplaces, so there’s that. Winner: Dynasty
Wally: I was thrilled when Sonic Boom came out. I really thought that Psycho Circus was the last time we would see KISS enter the studio, so just the fact that we would actually get new Kiss records was awesome. When it came out, I was quite pleased. Sonic Boom was so much better than Psycho Circus, Kiss was back releasing rock n roll. Tommy and Eric played great and the album felt like a BAND unlike Psycho Circus.
That said, Kiss’s “Disco” album came out and I remember clearly my Mom purchased me the single for “I Was Made For Loving You”. I loved the song but then I flipped it over and hear “Hard Times” that song floored me. I must have played it a couple hundred times that week. Years later I purchased the cassette and it truly is a dynamic album with some great melodic songs. My Mom was a Disco Queen and she never played my Dynasty album so to me it was always just a great KISS record, not the heaviest album but still rock n roll. Winner: Dynasty
Round 1, Game 10 – Dynasty throws a no-hitter. Score 5 – 0.