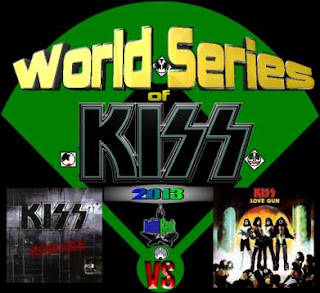 BJ: I think Revenge is overrated. The band somehow sold the fans on the idea that it was Destroyer II, well guess what, I think Destroyer is overrated as well! By overrated I mean I do not agree that they are two of Kiss’ best albums, but I also don’t see any similarity whatsoever between Revenge and Destroyer. Revenge starts strong with Unholy and yes, that song is a departure from the sound and style of the band’s previous few albums, but the next song, Take It Off, would not sound out of place at all on Crazy Nights or Hot In The Shade. Then we get Tough Love and Spit, both terrible songs. After a recycled Argent tune we get the annoying Domino. Heart of Chrome and Thou Shalt Not are decent songs but again, the idea that Revenge was somehow artistically superior to the previous few albums is a fallacy as far as I can tell. I like most of what Kiss did in the eighties and do not agree that Revenge is somehow a superior piece of work, in fact I think I like every eighties album more than Revenge and also Heart of Chrome and Thou Shalt Not would not really sound out of place on any of those albums. After a god awful ballad and a formulaic Gene song we finally get to my favorite song on the record, I Just Wanna. Now that’s a Kiss song! As for Love Gun, it begins with my favorite Kiss song of all, I Stole Your Love, and features two more of my very favorites, Shock Me and the title track, but there are a couple stinkers (Hooligan, Almost Human, Then She Kissed Me) as well. I even employed my 1-10 scale just to be sure and Love Gun won handily, averaging 6.1 to Revenge’s 4.3. I vote Love Gun. Winner: Revenge

AAron: Editor’s note: Our Beloved Decibel Geek Co host is on some sort of whirlwind LOS ANGELES trip. Probably sipping some cold beverages with Lemmy at the Rainbow but he when asked about this match up he said… “Love Gun!”Winner: Love Gun

Rich: I suspect here that my Decibel Geek judges will choose Love Gun and I agree that it is a classic album containing some great KISS tracks, but the album doesn’t make my top five KISS records.  Revenge, however does hit that top five list.  I remember buying the album, being excited for its release for this was at the height of my KISS frenzy.  I had seen the concerts twice by now and knew that a new album meant a new tour.  And I was of course correct and the first tour came before the album was released.  KISS played a small club show at the Phoenix Concert Theatre in Toronto and I was there, leaning on the stage for the entire show!  It took myself and two other KISS Geeks three days of rotating our position in line outside the general admission venue and we were rewarded with great spots for the show.  I slapped Bruce’s hand, Gene stepped on my hand and smiled at me and I got more guitar picks than I know what to do with!  If I look at the music, Love Gun contains awesome tracks like I Stole Your Love, Christine Sixteen, Shock Me and Love Gun, but I prefer Revenge’s Unholy, Spit, Domino, Heart Of Chrome, Thou Shalt Not, Paralyzedand Carr Jam 1981 (I still have the newspaper clipping announcing Eric’s death).
If we look at it in terms of a 10 goal hockey game (I am Canadian after all…lol) The Meister predicts the scoring outcome would be Revenge 7 – Love Gun 3. Winner: Love Gun
Chris: This is another emotional decision and is not as easy as one might think.
Revenge was the first KISS album that I bought on release day. I remember arriving at the Sam Goody at the mall and waiting for the metal gate to rise up. The cashiers had a good laugh at my expense when I rushed to the counter with my longbox (remember those?) copy of Revenge. KISS was about as un-cool as you could get but I didn’t care as the video for ‘Unholy’ had me frothing at the mouth to hear the album. The album is loaded with great songs and a hard-edged production that was expertly brought out by Bob Ezrin. Revenge still sounds amazing today.
Love Gun is a true gem in the KISS catalog and helps epitomize why KISS were the biggest band in the world when the album was released. Eddie Kramer proves that less is more with a sparse production that lets KISS be KISS. ‘I Stole Your Love’, ‘Shock Me’, and ‘Love Gun’ more than make up for a handful of clunkers (including ‘Hooligan’ and ‘Got Love for Sale’). A great album from top to bottom.
Kind of hard to pick but I’ll go with KISS at their peak in a close shave. Winner: Love GunWally: Hmmm? Probably a slam dunk for Love Gun as this was Kiss at their absolute peak of popularity. Love Gun is an amazing album no doubt but once again we have the whole heart vs brain thing happening. I came of age in the 80’s and so much of my misspent youth was spent devouring, defending and LOVING the non makeup era of KISS. After the Hot In The Shade Tour, I couldn’t wait to hear what was coming next as that show totally re energized me as a KISS fan and after Crazy Nights that was a good thing.

So when Revenge dropped and we got to see the Unholy video, it was like a sledgehammer. Finally a Gene single and a brutal heavy ripping single at that. Kiss were back looking lean and mean and the Revenge album rocks. Finally an album where Gene and Paul seemed totally on the same page, Bruce Kulick was stellar here and it gets tons of airplay on my ipod.

Even though Love Gun does have “I Stole Your Love” which is possibly my favourite Kiss song ever, simply from emotion and the great memories I am voting from the heart here. Winner: Revenge

Round 1 Game 11 sees Love Gun edge out a victory 3 – 2 over Revenge, with both Canadian’s voting for Revenge. (maybe there is something in the water up there?)