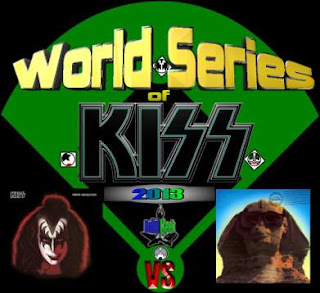 BJ: I love Radioactive and See You Tonite and do not hate most of the rest of Gene’s solo album but it would definitely be a rare occurrence for me to throw it on the turntable. While Hot In The Shade might feature some terrible songs (Read My Body, Love’s a Slap In The Face, Cadillac Dreams) I like most of the album. Rise To It, Silver Spoon, King of Hearts and The Street Giveth are great songs. Even though they could have pared it down to 10 or 12 songs and made it a much stronger record, I have to give this one to Hot In The Shade. That being said, Radioactive and See You Tonite are far better than anything on Hot In The Shade. Winner: Hot In The Shade

Rich: Gene Simmons Solo album does have some not bad songs (I do have an unhealthy admiration for the solo albums as one of my first KISS records was The Best of The Solos) with songs like Radioactive, Living In Sin and See You In Your Dreams and special guests such as Joe Perry, and Bob Seger among others.  Aside from that (and it’s a bit of a stretch) the album is largely forgettable and When You Wish Upon a Star is just embarrassing!  Hot In The Shade however holds a special place in my heart as seeing the video for Rise To It as a kid and watching the little prelude where the boys don the make-up for the first time in like seven years.  Coupled with that borderline erotic moment for a young KISS freak, but the resulting tour was the first KISS show that I ever saw live.  They played in Toronto with Whitesnake and KISS was on first and not allowed to do their whole show, they promised to return and give us the full KISS experience and they did just that, coming to Hamilton later in the year.  While my seats for this show were of the nosebleed variety, it turns out that esteemed colleague Wallygator was down on the floor at the same show all those years ago!

If we look at it in terms of a 10 goal hockey game (I am Canadian after all…lol) The Meister predicts the scoring outcome would be Gene Simmons 1 – Hot In The Shade 9. Winner: Hot In The Shade
Chris: This one is easy for me; but not in a way that many fans will agree.
I don’t like Gene’s solo album much at all. The funny thing is, I enjoy the Asshole album that he put out a few years ago. When I listen to the 78 solo, I hear a guy that’s lost in a haze of celebrity and Hollywood schmoozing (prophetic, eh?) trying to rehash a number of older demos with guests from all over the entertainment map. While some tracks are true standout gems like ‘Man of 1000 Faces’ and ‘Mr. Make Believe,’ the album is dragged down by some very dated-sounding songs (‘Radioactive,’ ‘Tunnel of Love,’ ‘True Confessions’) and strange guest appearances including Cher, Lassie, and Helen Reddy.
Hot in the Shade catches a lot of flak from fans for including too much material. Nonsense, I say! As a KISS die-hard, if some of these tracks were cut, I (and many others) would be scrambling around looking for the demo versions of the songs. You can’t have “too much KISS.” Sure, songs like ‘Boomerang,’ ‘Cadillac Dreams,’ and ‘Read My Body’ are not their best efforts, it’s nice to hear an album with a lot of KISS’ creative output brought forth. This was my first “new” KISS album after becoming a fan and I spun it continuously for a long time. I still love ‘Rise to It,’ ‘Betrayed,’ ‘King of Hearts,’ and ‘Little Caesar’ particularly. I’ve grown tired of ‘Forever’ but still think it’s one of Paul’s stronger ballads (even if it was co-written with Michael Bolton). Winner: Hot in the Shade

Wally: I remember when I purchased the Gene Simmons solo album, I couldn’t wait to hear what the demon was going to unleash. Before even listening to it, I knew it would be my favourite solo album. I was wrong. Gene really “got creative” here and explored songs that certainly didn’t fit within the parametars of KISS and I suppose that’s the whole point of doing a solo album. As an album I enjoy listening to it, there are some really great songs and over the years I have grown to appreciate the album much more than the 15 year old “heavy metal kid” who purchased it.

It was funny, after diving into KISS fandom I was always aware of what was happening in KISS land. I was always ready and from Animalize on I was always at the record store on each release date to snatch up whatever KISS was releasing.

I am not sure what happened when Hot In The Shade was released. For some reason I had lost track and had no idea the album had dropped. I clearly remember walking into “Cheapies” record store in Hamilton and noticing the vinyl album cover with the Sphinx and went “huh? What is this?” and instantly it felt like Christmas! A new surprise Kiss record for me! I remember dropping my plans to race home and spin the new album.

Hot In The Shade remains one of my favourite Kiss albums. This is a great rock n roll record and so underrated. I agree with BJ that maybe it could have been improved if they shaved it down two or three songs but I will never complain about too much KISS. “You Love Me To Hate You” became my favourite track but “The Street Giveth”, “Silver Spoon”, “Betrayed” and of course Eric Carr’s “Little Ceasar” are all standout tracks. This album was miles ahead of the filler filled Crazy Nights and the tour that followed was the icing on the cake. Winner: Hot In The Shade