World Series of KISS – R1 Battle 3 – Lick it Up vs. Creatures of the Night 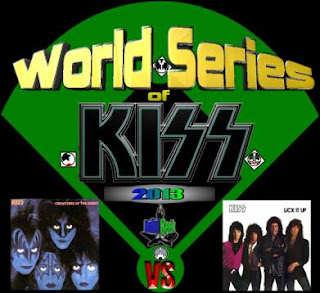 The battle really heats up for match up number three, as two KISS heavyweights step into the ring!

BJ: Creatures of the Night vs. Lick It Up is a close call. In my opinion they are both good albums, not great, with a few stand-out tracks. The obvious choice for best song of the bunch is the title track from Creatures of the Night. I’d rank “Danger” as my second favorite song on Creatures. My two favorite songs on Lick It Up are “Exciter” and “A Million To One.” That’s a clean sweep for Paul Stanley. These are Kiss’ two most metal albums and I had to resort to ranking the songs again, 1-10, 1 being shit and 10 being amazing. It was difficult but here’s how it played out:

AAron:  This tourney isn’t getting any easier, and this is only the first round! Luck of the draw brings back to back albums from ’82 and ’83. Creatures and Lick It Up are two of my favorite KISS albums. They equally display the heavy, hard rock sound that I love about the band. When Gene and Paul commit to not following trends and just being KISS they are the best band in the world. Eric Carr and Vinnie Vincent put in the greatest performances of their careers on both of these albums. To me, these are like sister albums and are equally fantastic. I’ll give the slight edge to Creatures of the Night, based on Vinnie’s stupid purple shirt on the cover of Lick It Up. Winner: Creatures of the Night

Chris: This is truly a Sophie’s (not Gene’s daughter) choice for me. I absolutely adore both of these albums. For the longest time, I did what Paul Stanley has accused many of the record buying public of doing; listening with my eyes as Creatures got more of my attention due to being a “makeup” era album. Cut me some slack, I was 13! Here we go:

Creatures of the Night is one incredible album. After a weak offering from the band in Unmasked and a confused release in Music from The Elder, lukewarm sales and poor concert attendance finally sent the message to Gene & Paul that they better get back to basics (plus). While Gene and Paul trumpet on and on about Creatures being a return to “meat and potatoes KISS” it was more than that. This was KISS finally living up to the dark, heavy image they had portrayed since day one. While I’ll always love Ace Frehley and still cite him as a huge influence on me as a guitarist; the step up to shredding that began on this album was a welcome sound to these ears. While I know it was a revolving door of people that contributed to the lead playing including Robben Ford and Bob Kulick, the addition of Vinnie Vincent in the songwriting department made this album a KISS classic. His work with Gene on I Love it Loud and Killer is a match made in rock and roll hell (pun intended). Some people say co-writers can suck the chemistry out of an album but in Creatures’ case, it totally worked. Everyone that came to help out did and it was all underscored by Eric Carr’s thunderous drumming.
Lick it Up is one of the most overlooked albums in the KISS canon. The album that introduced the world to non-makeup KISS delivered the goods right from the opening track, Exciter. While this album is every bit a Vinnie album as it is a Gene/Paul album, my favorite solo on the whole thing might be on Exciter and it features Rick Derringer of all people. Vinnie’s presence is certainly felt throughout with his blistering leads and songwriting chops. As sick as I am of hearing it, Lick it Up is undoubtedly one of the better 1980’s rock anthems. Vinnie co-write 8 of the tracks and, in my opinion, A Million to One had “radio hit” written all over it. Why All Hell’s Breakin’ Loose was chosen as the single over it still makes zero sense to me (although it’s a great song as well). For some reason, this album tends to get ignored and it’s a shame because it’s KISS truly being themselves while updating their sound and not following trends; something they would do later on.
Why do I have to decide?? Damnit, here goes: Winner: Lick it Up (but only by a hair)
Rich: This match-up is my hardest choice so far in the Decibel Geek KISS album War.  While neither album is even in my top favourite five KISS records, some of the tracks from each album certainly are and worm their way into playlists on a regular basis.  Neither album cover is awe-inspiring unless we take into account the original Creatures artwork that is difficult to find now.  From Creatures we have the title track Creatures of the Night, I Love It Loud(the video was awesome when we were kids) and War Machine.  From Lick It Up are All Hell’s Breakin’ Loose (an all time fave track), A Million To One and the title track Lick It Up.  I listened again to each disc cover to cover to refresh me and assist in this battle.  While I enjoyed listening to both CD’s, something I haven’t done in a long time and each contained some high points that had previously slipped from my memory, I think that Lick It Up is the winner here simply because it doesn’t contain I Still Love You, a track that I hate and always have with all fibre of my being!
If we look at it in terms of a 10 goal hockey game (I am Canadian after all…lol) The Meister predicts the scoring outcome would be Creatures of the Night 4 – Lick It Up 6. Winner: Lick it Up

Wally: Ouch, this sucks as I have to eliminate one of my favorite albums. The last album to feature the makeup vs the first without it. As B.J. mentioned these both of these albums are “Heavy Metal KISS” and both of them are mainstays on my ipod.

My first instinct was to jump on Creatures as I totally love the obscure stuff on that album “Killer”, “Danger”, “Rock n Roll Hell” and the title track is flawless. The album cover with the glowing eyes is my favorite cover of all KISS albums and I have always referred to Creatures as a metal masterpiece.

Then I had to re look at Lick It Up. Maybe it’s a timing thing for me as Lick it Up dropped as my friends and I had just “discovered” metal and were clamoring for everything we could get our hands on. The video for Lick it Up was in heavy rotation and this album quickly joined our collection. We devoured it, every note, every song and to us there were no weak links on this album. “Fits Like a Glove”, “Dance All Over Your Face”, “A Million to One”, “Young and Wasted” and the evil “Not For the Innocent” it was heavy metal bliss and more over the top tha
n Creatures. I am sure taking off the make up had something to do with this and I would have to say the inclusion of Vinnie Vincent (stupid purple shirt and all LOL) in the songwriting and the six string shredding, really turned this album up a notch. Surprising to even myself I choose “Lick It UP”. Winner: Lick It Up