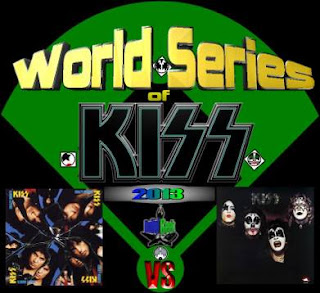 BJ: It seems like Crazy Nights is the most derided Kiss album but there are some great songs on that album. Turn On The Night is my favorite but I also love When Your Walls Come Down. I’ll Fight Hell To Hold You and the title track are also really good. I think Gene’s songs on the record are pretty bad and Paul’s Bang Bang You is embarrassingly awful. Paul’s pair of ballads are weak as well. But I’m satisfied with four great songs on a record, I’ll take that. While I’m sure the songs would sound better with punchier, crunchier production I don’t think Ron Nevison’s production work ruined them by any means. As for the band’s 1974 debut, Strutter and Black Diamond are masterpieces, perfection, those songs should be in the Library of Congress, Smithsonian, screw the Rock and Roll Hall of Fame. Let Me Know and Deuce are great, 100,000 Years is alright but what is up with those lyrics? This might be Kiss blasphemy but I’ve never really liked Cold Gin and I think Firehouse is a bore. Nothin’ To Lose has a nice melody on the verse but I’m not crazy about the chorus. It might just be that Peter’s parts annoy me. All in all Kiss’ debut is a really fun seventies rock record and definitely a harbinger of great things to come. I hear a lot of negativity about the production on the album but I think it’s fine, this is what seventies rock in 1974 sounded like, and I love me some seventies rock from 1974. I vote, obviously, for Kiss-Kiss. Winner: KISS

AAron: Finally an easy one! The 1973 debut album is a masterpiece! Crazy Nights is just a piece… with a couple diamonds stuck in it! Great poppy rock tunes that where popular at the time, solid playing by Kulick and Carr and catchy songs written by Stanley and Simmons. Compared to Bon Jovi, it’s fantastic. Compared to the debut album, it’s garbage. Winner: KISS

Rich: This choice was another easy one for me, but I fear there may be more ridicule from my judging cohorts.  I made this choice based on feeling alone and remembering times of my youth when I listened to the album.  While the debut and start of the phenomenon that is all things KISS is chock full of some of the most classic and best KISS songs ever, it also contains some absolutely forgettable tracks such as Love Theme From KISS and Kissin’ Time, maybe they’re just so overshadowed by the rest of the album.  With Crazy Nights, however, I remember buying the 45RPM single for the song Crazy Crazy Nightsas a kid.  I remember plagiarizing the lyrics to a couple of the songs for poetry or something in English class.  I remember seeing the video for Reason to Live, a song that helped me through some of the depressing days that come to all teenagers, often humming the chorus “’Cause everybody’s got a reason to live”.  I acquired Crazy Nights at the height of my thirst and hunger for more KISS music and it will always remain on top for me, alas, I suspect that it’s defeat here could be a messy one!

If we look at it in terms of a 10 goal hockey game (I am Canadian after all…lol) The Meister predicts the scoring outcome would be Crazy Nights 8 – KISS 2. Winner: Crazy Nights


Chris: Being, probably, the only fan of Crazy Nights on staff this matchup really pains me.
I was 11 years old when I discovered KISS and Crazy Nights was the current album at the time. I had been hooked into rock music via glam rockers like Poison, RATT, and Cinderella. It was easy to get into the hook-laden stuff that KISS was producing during this time and I fell for it. I don’t rank it as high today as back then, but it deserves credit for opening the door to everything else for me.
What can you say about the self-titled debut that hasn’t already been said? This album was the foundation that everything was built and a large portion of it still owns space in today’s set list (a sore subject for another day). Aside from Love Theme, there’s nothing weak on the album. Yes, the production is dry and thin and someone was truly on drugs when they thought slowing the tape at the end of Black Diamond was a good idea. Kissin’ Time gets a lot of hate but I love it for the kitsch factor. The pluses bury the minuses on this record. Going to be hard to top this one overall. Winner: KISS
Wally: I will agree with AAron on this one, it really was and easy choice for me too. Crazy Nights was a good album that had a few decent songs on it and I love it. I was 18 years old and rocking the 80’s when it was released. It was in the cassette deck along with Def Leppard and Motley Crue and it brings back some great memories BUT lets take a look at the debut album.
I have had many discussions with my fellow writer Rich about this and I totally agree with him that the production was muddy, the songs seemed slowed down and sluggish (compared to the versions on Alive) but the fact is, this album contained the goods! The songs found on this glorious debut still stand strong 40 years later. Seven of the ten songs on this album are still regularly played live by the band! Deuce, Strutter, Cold Gin, Firehouse, Black Diamond, Nothing to Loose, 100 000 Years all hold up, Crazy Nights? not so much. Winner: KISS
Round 1 Game 4, the Win goes to the self titled debut album KISS with a score of 4 – 1