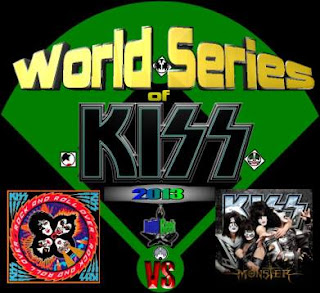 BJ: This one is a no brainer. I don’t like Monster very much at all. I’m not sure where Paul’s tremendous songwriting ability has gone but his songs on the last two albums, to me, sound forced and contrived. Like Sonic Boom my favorite song on Monster is the one Paul wrote and Eric sings. Rock and Roll Over is of course a classic seventies rock album. I love the fact that after the overblown production on Destroyer the band went back to basics with Eddie Kramer. Rock and Roll Over is really good all the way through, minus Baby Driver and I am not crazy about Makin’ Love. Mr. Speed is my favorite song on the album but I Want You is a close second. Gene’s songs on the record are all strong. The only thing that was missing was an Ace composition. This is a “duh” vote: Rock and Roll Over. Winner: Rock & Roll Over

AAron: I was very happy with Monster when it came out last year. I think it is modern KISS doing the best they can to represent the classic KISS sound, and they do that very well. KISS proves and continues to prove why, even in today’s age, they are still one of the best bands in the world. Even without Ace and Peter. I am totally cool with the fact that KISS continues on, and I am grateful that Gene and Paul have Eric and Tommy who are stellar musicians and they get what KISS is supposed to sound like. With that said you can never beat the real deal! As good as KISS is today they could never be as good as KISS in 1976, but then again, who can? Easily, Rock N Roll Over. Winner: Rock & Roll Over

Rich: I am not a huge fan of either of these albums although they do both contain some great tracks like Calling Dr. Love and I Want You from Rock and Roll Over and Hell or Hallelujah and Long Way Down off of Monster.  The latter is certainly the best thing that the boys have done since 1990’s Revenge, proving that they’re not kaput just quite yet. These albums are from two very different eras and therefore, like most of these comparisons have very different sounds.   Rock and Roll Over was one of the last KISS albums to join my collection and the high points to me had already been heard on the ridiculously over played Double Platinum.  Monster represents to me a new era in which while KISS never changes their set list at least they are still producing new music that holds up to the immense back catalogue.  Although not a favourite of mine, Monstergrows on me with each listen and in my score book would defeat amore than a few in this competition.

If we look at it in terms of a 10 goal hockey game (I am Canadian after all…lol) The Meister predicts the scoring outcome would be Rock and Roll Over 4 – Monster 6. Winner: Monster
Chris: This is hardly fair but I’ll go ahead and analyze.
Rock n Roll Over could be KISS’ best group output of the 1970’s. It had the maturation of the band (brought on by a stay at Camp Ezrin) getting serious with a back-to-basics approach. You can hear the British Invasion influence on album opener ‘I Want You’ as well as the Zeppelin-esque ‘Makin’ Love.’ Standout tracks also include ‘Mr. Speed’ and the seriously underrated ‘Hard Luck Woman.’ With plenty of sexual innuendo and fiery playing, it’s everything that was good about 70’s KISS.
Monster is, in my opinion, KISS’ love letter to the genre of Rock n Roll. While I’ve heard the band try to harken back to their previously released material, this album is different in that it harkens back more to their influences. You hear call backs to Mountain, Humble Pie, Jeff Beck, The Troggs, and more in this record. It’s nothing groundbreaking but it’s damn entertaining and I think it’s a definite step up from Sonic Boom (which I also enjoyed). Monster, to me, is KISS’ best studio album since Revenge but in no way can it touch Rock and Roll Over. Easy KO. Winner: Rock & Roll Over

Wally: Well, well think I might just surprise some people here with my pick. I completely understand the impact and importance of Rock & Roll Over within the catalogue, The back to basics rock n roll sound that followed the overblown production of Destroyer. This was Kiss as they should be, straight no bull shit rock n roll. It’s an amazing album.

Monster, however surprised me. This is the album I expected from Psycho Circus. I think its focused, with well written songs played with a fire and passion that we haven’t really heard from KISS in a long time. Sonic Boom hinted at it but Monster delivered. I expected Rock n Roll Over to be amazing, they were on top of the world and at a creative peak at that point. I didn’t expect Monster to be as good as it is, I really love that we still have this band around and that this latest album got me excited to be a KISS fan. A long way from the rubbish and disappointment of Psycho Circus. For this fact I vote Monster. Winner: Monster
Round 1 Game 6 Rock n Roll Over wins a close one against Monster. Score 3 -2