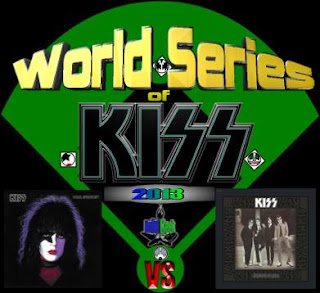 AAron: Again, it’s tough to compare Paul ’78 to Dressed to Kill because they are essentially two completely different bands, with only Paul Stanley in common. Although Paul Stanley pulls off an amazing solo album that is packed full of blazing guitar riffs and fantastic songwriting, it wouldn’t matter if it was John, George, Ringo and Paul… Stanley. There was nothing any member of KISS could have done on their own to match what KISS had done as a whole with Dressed to Kill. Winner: Dressed To Kill

Rich: Well, again I already had my mind made up before I gave them both the full through listen that I promised I’d give every album in this competition and I stand by my first reaction, but I suspect I’ll be alone in this one as well.  If we were to base the judgement on album art work alone Dressed To Kill wins no contest.  Although Dressed To Kill is an iconic album and it does contain great tunes like Rock Bottom, She and of course Rock and Roll All Nite, I prefer the heavier sounds of Paul’s solo effort.  Tracks like Love In Chains, Move On and Wouldn’t You Like To Know Me just drive the record forward.  One of the highlights for me on this one is the ballad, Hold Me, Touch Me (Think of Me When We’re Apart), which I used to sing to my first girlfriend, but I guess in hindsight it’s no wonder she dumped me!

If we look at it in terms of a 10 goal hockey game (I am Canadian after all…lol) The Meister predicts the scoring outcome would be Dressed To Kill 2 – Paul Stanley 8 Winner: Paul Stanley
Chris: This one won’t make me popular among some fans but I’ve got to go with what I like.
Paul Stanley (1978) is one of my favorite albums of the 1970’s. This album makes a compelling case that Paul would have been a successful solo act. When left to his own devices, he can write some amazing grandiose sounding rock music. His sense of melody, song structure, and dramatic use of space within a song demonstrates that he’s truly a great songwriter when he’s coming from the heart. His ability to straddle between hard rock and melodic rock with the layering of acoustic and lead guitars is on full display and provides a very complete sounding album. This doesn’t sound like a one-man show. It’s as “full-band” as it comes. His fellow players also turn in stellar performances. A great album from start to finish.

Dressed to Kill is put pretty high on a pedestal for many KISS fans. It deserves a high place in the band’s rankings. I love tracks such as Room Service, C’mon and Love Me, She, and Rock Bottom. The band is playing air-tight during these sessions because they were in the middle of touring when this was made. Ace’s soloing is great on this disc as well as Peter’s drumming. I also enjoy the use of acoustic guitar as an extra sheen to some of the tracks. The only downside to this album, for me, are tracks like Two Timer and Ladies in Waiting. These songs sound very thrown together and they just don’t click for me. I’m sure some of you think I’m nuts but that’s just how I feel. It’s a close matchup but I’ve got to go with which album I like more on-the-whole. Winner: Paul Stanley

Wally: When  these two albums were pulled out of the hat, I figured it was a slam dunk for Dressed to Kill and for a moment I agreed. That was until I sat down and listened to both albums back to back as “research” for the tournament. Dressed to Kill is a classic no doubt and of course features the most famous KISS song ever, the national anthem of KISS, Rock n Roll All Nite. That alone would make people think this an easy victory for Dressed to Kill. Of course it wasn’t a one trick pony with Rock Bottom, She, Lover Her All I Can, and my personal favorite Room Service. Dressed to Kill had some amazing songs but was also plagued again with horrible production.
Then I put on Paul Stanley’s 1978 solo album. It had been quite some time since I had listened to this album top to bottom. I had always enjoyed this album but lying on my couch with my headphones on, I really REALLY absorbed this album. The songs here are really strong, It’s Alright, Move On, Ain’t Quite Right, Love In Chains, great rock n roll songs with groove and swagger. Now the album does contain some ballads but they are all beautifully written and performed and the production on this album is spectacular.
I love the songs on Dressed to Kill, but would prefer to hear them on the live albums where they come to life with energy and attitude. Paul Stanley gets my surprise vote here. Winner: Paul Stanley
Round 1, Game 7. In what just might be the upset of the series, Paul Stanley advances past Dressed To Kill with a score of 3 – 2.