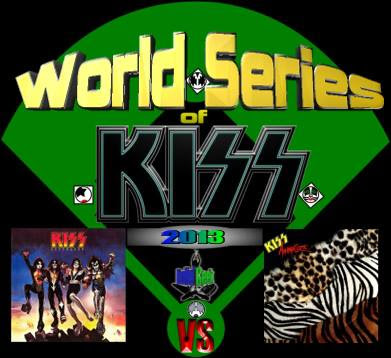 BJ: I’ve Had Enough (Into The Fire) is really great, one of my favorite Kiss songs from the eighties, and I like Heaven’s On Fire but after those first two songs Animalize takes a nose dive., I’m not a big fan of any other song on the record, Paul’s other songs are generic and uninspired. Burn Bitch Burn and Murder In High Heels are horrible and Gene’s other songs are at least listenable, but lackluster. Gene didn’t put a whole lot of effort into his contributions and it shows. Destroyer is my least favorite Kiss album of the seventies. Obviously Detroit Rock City is magnificent and I adore King of the Night Time World, but God of Thunder is hard to take seriously, Great Expectations is garbage, and Flaming Youth is great but Sweet Pain is not. Shout It Out Loud has a wonderful verse and bridge but I wish the chorus was more melodic. Beth is ridiculous and I do not like Do You Love Me. In other words, at least half of Destroyer leaves me cold, but a few songs blow me away. The overblown production was completely unnecessary. Ezrin did not take Kiss to some other level, he laid it on too thick for no good reason. Just let them be a rock band man! I vote Destroyer, but the album’s lucky it was up against Animalize and not Asylum! Winner: Destroyer

AAron: Again, for me, it comes down to the fact that you just can’t beat the real thing. Sure, Dick Wagner played some guitar in place of Ace (and did some awesome work), it was 1976 and the band was coming off the success of KISS Alive! They needed to deliver the goods and they produced what is arguably their most popular studio album. Animalize is the same way, KISS needed to prove that they had what it took to carry on without Vinnie Vincent… I’m only kidding! Seriously though, Animalize is a fantastic and heavy album with some of Eric Carr’s best drumming, as well as the virtuostic Mark St. John on lead guitar. As great as it is, it in no way matches Destroyer. From the songs to the cover, Destroyer wins everytime.

Rich: Animalize is again not one of my favourites, being one of the last to join its’ brethren on my wall of cassette tapes but it does contain a couple of good tracks.  Heaven’s On Fire, Under The Gun and I’ve Had Enough (Into The Fire) are the best the album has to offer and Burn Bitch Burn has always been comical to me.  Destroyer was one of the early ones to join my collection, containing another highlight for me in Do You Love Me which on my cassette version led off the album, some sort of misprint indicated otherwise.  I know that Destroyer is considered an iconic Kiss record and recently got the remastering that it deserves, but I can certainly do without Great Expectations as it’s not particularly a winning endorsement.   Simply on the strength of Do You Love Me, Detroit Rock Cityand God Of Thunder Destroyer, as it’s title suggests destroys the flaccidity of Animalize.

If we look at it in terms of a 10 goal hockey game (I am Canadian after all…lol) The Meister predicts the scoring outcome would be Animalize 2 – Destroyer 8 Winner: Destroyer
Chris: Being a fan of 80’s KISS, this should be a lot harder than it is.
Animalize sold pretty well out of the gate after the renewed interest in the unmasked version of the band on Lick it Up. ‘Heaven’s on Fire’ seemed to help propel the band back to more mainstream exposure and get them off life support. The only problem was, there was a lack of strong material on Animalize. Mark St. John was not the answer Gene and Paul were looking for and it’s painfully evident on the over-the-top solos. St. John made Vinnie Vincent look like Angus Young with his bumblebee on crack playing on this album. Also, Gene was churning out some of his worst material during this time due to his interest in Hollywood. Paul gets an A for effort but the guy can only do so much with Gene talking about logs and fireplaces. Unfocused album from the band.
Destroyer is seen as a template to follow for Gene and Paul in interviews as they constantly seem to bring it up for comparison-sake with every new release. The strange thing is, Destroyer sounds nothing like anything else in the KISS catalog. When Bob Ezrin makes an album with a band, he does a good job in making sure that it’s hard to repeat that album. That’s a testament to Ezrin’s superior production chops. The album was seen as a “sell out” by the die hards and they do make a valid case as it was definitely a much more commercial sounding album. But, KISS wanted to go to the next level and this was a necessary evil in that transition. That said, the album is chock full of great riffs, catchy hooks, and a much beefier sound. It’s a classic album and it deserves the accolades that it gets. Winner: Destroyer
Wally: This one is almost as tough for me as Lick it Up VS Creatures of the Night. Destroyer seems to be the obvious choice here. Kiss broke huge with Alive allowing them the freedom and resources to get creative and really spread their wings. Bob Ezrin was able to finally remove the slow, muddy production and Kiss delivered some classic songs. Detroit Rock City, Shout It Out Loud, God of Thunder but it wasn’t just the songs found within. To me, Destroyer really captured the concept and characters of KISS, from the amazing cover to the tour that followed this was the start of “Super KISS” and all that was about to follow. Kiss were no longer a rock band after the release of Destroyer and this is why Destroyer seems to always be the benchmark that the band refers to.

Animalize was another one of those “vote from the heart” albums. Pure heavy metal KISS! It came out when I was 14, was the first concert tour I got to see and Thrills In The Night was the first song I learned to play on the bass guitar. So for personal reasons Animalize is very close to my heart as a KISS fan. That said Destroyer also takes me back to my grade 8 trip to Ottawa as it was on this “educational” trip that I purchased my first copy of Destroyer. The bus ride and hotel room stay was spent blasting destroyer and air guitaring
for hours. I choose DESTROYER. Winner: Destroyer