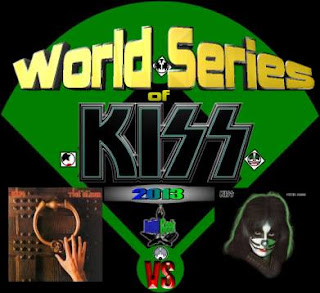 BJ: Some album had to take out Peter Criss’ solo album, and I’m glad it’s The Elder. The Peter Criss album is just awful, as are the songs he contributed to Kiss albums, just not the kind of music I like. As for The Elder, I’m a fan. The Oath and Odyssey are amazing songs. The Elder is a fun record to listen to, I try not to let the history of it and all the stories and legends taint the experience. Yes it was a bad move, Kiss trying to write a concept album, but perhaps they could have made it work if they didn’t half-ass it. Can I say this, what is up with the percussion on Dark Light? I don’t like it, and the song is not one of Ace’s best. You’d think Gene would have had more fun with the fantasy elements, and bringing in Lou Reed to give the record some artistic cred was a lame move. I think Just a Boy is really cool, I like it a lot. As for the song that seems to be most fans’ favorite on the record, I, the verses are good but I think the chorus falls flat. As an album, just putting it on and letting it play, I can really enjoy The Elder, but this match up isn’t fair, what album wouldn’t defeat the Peter Criss album? I vote Elder. Winner: Music From The Elder

AAron: Ha! It’s funny that these two match-up in the first round. Most likely the Collective KISS Army’s least two favorite KISS albums. Peter ’78 is so, so, so far away from what KISS is, but then again so is The Elder. A strange face-off indeed. I would have never guess that I’d be picking The Elder to go into the second round, and versus Peter’s solo album is probably the only way that it ever happens. Even though it was really weird, Ace blisters on lead guitar (when he’s aloud to) and no album in this tournament is worse than Peter’s. Winner: Music From The Elder

Rich: Again in this competition we see two obviously very different KISS records.  I didn’t really understand Music From “The Elder”’s concept album when I first got it in days of my youth, but listened to it over and over, trying to like it and eventually it worked, at least mostly.  What I was happy to see was that Only You appeared on Doro Pesch’s Doro album, produced by Gene Simmons no less, so it’s not really that much of a stretch.  I much prefer her version of the song.  Iis another of my KISS favourites and Mr. Blackwell also holds an oddly special place in my heart.  Peter’s solo however and again I do expect some flack or raised eyebrows from the panel of judges here, makes the cut into my top five KISS albums.  Its’ easy listening, bluesy feel is just what the doctor ordered when you want something a little less in your face.  I find the songs to be well written and enjoy every one.  Also I have been able to sneak the record into the playlist on the mp3 player at the southern BBQ restaurant that I work at, so I get to hear some KISS amidst the entire southern blues soundtrack that is my workday.

If we look at it in terms of a 10 goal hockey game (I am Canadian after all…lol) The Meister predicts the scoring outcome would be Peter Criss 8 – Music From “The Elder” 2. Winner: Peter Criss
Chris: Two very strange albums in the KISS canon. Kind of ‘pick your poison’ eh? Here we go.
As much praise as I heap on Ace & Paul’s solo albums, Peter’s is almost the other way around. I’m a big fan of oldies and love doo-wop and swing music. That said, this is just a mess of an album. I found out many years later that many of these songs were demos from one of Peter’s pre-KISS bands. That makes more sense as it’s totally disconnected to anything KISS was doing. I’ll always be a fan of Peter but this is a disjointed effort. I’ll give him credit for doing the album that he wanted but it just doesn’t work for me. The only bright spots, to me, are the ballads. ‘Easy Thing’, while melodramatic, is an endearing tune and ‘I Can’t Stop the Rain’ is one of Peter’s better songs (although I hear this was more of a Sean Delaney song).
There was a period of time that I had convinced myself that I really liked Music from the Elder. That time is now over. I admit to liking a handful of tracks on the album like ‘Escape from the Island,’ ‘The Oath,’ and ‘Only You.’ Unfortunately, songs like ‘Just a Boy,’ ‘Odyssey,’ and ‘I’ were just too much airy-fairy schlock for me to overcome. I’ve got a wide musical pallet but this is just too much. KISS was never destined to be a prog-rock band and this confused effort cements that fact. Hard to pick but I must: Winner: Music From The Elder

Wally: I laughed when I heard this matchup, I mean what were the odds of the Elder making it to the second round here. Although being the KISS geeks we are anything is possible, we have seen that in other match ups thus far.

Peter Criss’s 78 solo album really didn’t do a lot for me, as BJ stated “just not the kind of music I like”. I remember my Dad enjoyed this album much more than I ever did. Hearing it in it’s entirety as preparation for this, nothing much has changed. The songs are decent, bluesy and mellow as hell in the context of KISS and it still doesn’t move me whatsoever.

Music From The Elder on the other hand is something different. Almost a dirty little secret, scorned my the masses and the media but adored by the Kiss geeks worldwide. I have mentioned before that one of the things I enjoy about Kiss is the variety of their albums. There’s classic Kiss, heavy metal Kiss, Pop Kiss and the dark experimental Music From The Elder is certainly left of all of that. I remember hearing for the first time in the mid eighties and thinking “WOW its so strange” but I loved it. I loved it for it’s strangeness. I do think the album could have been better and I understand that not all KISS fans “get it” but overall I still enjoy it for its geekyness and play it quite often on the ipod. Now that said, I still can’t imagine picking the elder over many other albums other than Peter Criss or maybe Psycho Circus! Congratz to the Elder for drawing the lucky card here. Winner: Music From The Elder

Round 1 Game 9 sees Music from the Elder victorious. Score 4 – 1