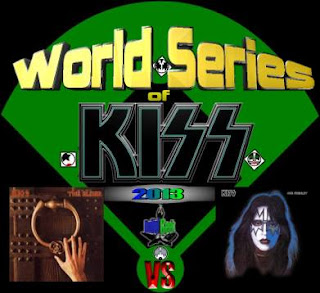 Chris: I think I agree with Mr. Frehley’s own assessment on The Elder. He smashed the tape against a wall when he heard it. While it doesn’t anger me that much, the older I get, the less I like it. I convinced myself that I loved it back in the day but I think I was just too far into fanboy territory to see how weak of an album it is. Maybe I was better off back then.

Ace’s solo album is going to be very hard to beat in this World Series. It stills reigns high over many albums in the KISS catalog and I look forward to seeing its next opponent. Winner: Ace Frehley

Rich: I was disappointed that Music From…The Elder defeated Peter Criss’s Solo effort in the first round and here it comes up against another 1978 Solo record.  While I do enjoy Music From…The Elder from time to time, I think that Ace Frehley’s Solo is the stronger of the two choices containing solid tracks like Rip It Out, Speedin’ Back To My Baby and New York Groove.  Music From…The Elder does have some high points as well such as Iand Mr. Blackwell, but is a more eclectic listen overall.  It’s interesting that I voted for neither of these two records in the first round, but struggle to choose the clear victor amongst them both now.  Which do I play more often?….Music From…The Elder.  Which is a stronger musically?….Ace Frehley.  A couple of rounds ago I said that I should vote with my head and not my heart, so I take Ace Frehley, but ask me tomorrow and it could be the other way around! Winner: Ace Frehley

AAron: Now I did say that there were KISS albums that I liked less than Paul Stanley’s solo, so I am not a hypocrite when I say Ace ’78 is waaaaaay better than Music from The Elder. The Elder is a very schizophrenic album with all the players going in different directions, except for Anton Fig, who was there to kick ass and get paid! Ace’s ensemble may be a completely different band than KISS, but Elder era wasn’t exactly sounding much like KISS either. Some parts of The Elder I like alot, but most of it I don’t understand. I understand what Ace is doing on his solo album, and I like it all. Winner: Ace Frehley

BJ: No contest here, Ace Frehley’s album is a tour de force and The Elder was forced and de was no tour. But holy guacamole The Oath kicks ass! I love that song, and I can do without Fractured Mirror, but this is no contest, Ace’s solo album reigns triumphant. Winner: Ace Frehley

Wally: Being the complete Kiss Geek that I am, I love The Elder! I was thrilled when the album advanced to the second round of the tournament but I fear the luck has run out. It seems nobody is escaping the island as Ace Frehley’s 78 solo album was drawn as the Elder’s opponent in round 2.

There was much thought of even including the solo albums in this experiment we call the World Series Of Kiss, but I am glad we did. It’s interesting to see how they have stacked up against other Kiss records and I seriously think Ace will be advancing once again with Mr Blackwell running for cover. I love Mr Blackwell but Ace takes the win. Winner: Ace Frehley