World Series Of KISS – ROUND 2 – Dynasty VS Love Gun 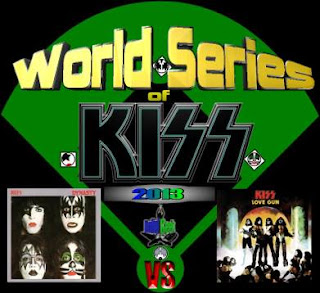 Welcome to Round 2 of the Decibel Geek’s WORLD SERIES OF KISS. Six great match-ups so let’s get ready to rumble as two classic albums take the field…

Love Gun still contains some of that original band fire due to Eddie Kramer’s help. The solo in ‘Shock Me,’ the jungle-like vibe of ‘Almost Human’ and the majesty of the title track provide a powerful product.

Dynasty is a definite left-turn in the band’s sound but, as I said before, it’s still a rock album at heart. Ace’s increased contributions only help that. Close contest. Winner: Dynasty

Rich:  Again here I’ll take the ridicule and abuse here, I was surprised to see Dynasty secure a first round win over Sonic Boom, while it was my feeling I thought surely that my cohorts would disagree, knowing at least one who appreciates Sonic Boom in a way that I just can’t catch.  I like the Dynastyalbum a lot and Charisma is an all time fave track since my youth, can’t even really explain why.  I tend to gravitate to the less popular, swim upstream if you will, root for the underdog.  If it’s highly popular there’s a good chance that I’m not overly interested.  Love Gun falls into this category.  While it contains killers like Got Love For Sale, Christine Sixteen and I Stole Your Love, the title track itself I’m rather sick to death of and horrible cuts like Plaster Caster and Then She Kissed Me bring the album waaaaay down.  It shouldn’t have beaten Revenge under any circumstances in the first round.  Dynastyis the clear winner here for me, but I fear I may be alone in that! Winner: Dynasty

AAron: Straight ahead Rock KISS Vs. Late 70’s Trend Chasing KISS? This shouldn’t be too hard, although Ace Frehley’s contributions to Dynasty make it hard to dismiss easily. Anton Fig definitely brings a big drum sound to the album as well. Good songwriting even if it is tinged with a glossy Disco sound… they all did it. Love Gun era KISS is probably the most over the band has ever been, the World had KISS fever and they were everywhere you looked in ’77. It’s strange to think that Dynasty is the studio follow up to Love Gun, only two years, but what a difference! I gotta go with KISS just being KISS. I vote Love Gun. Winner: Love Gun

BJ: Hmm. This is an interesting match-up. Minus Dirty Livin’ Dynasty is a damn good album and while Love Gun contains three of my very favorite KISS songs it also contains a few songs I actually dislike. Looks like it’s time for the dreaded 1-10 scale!

Wow, look at that, song for song Dynasty kills it. That’s crazy, because there are three 10’s on Love Gun, but also a 1, 2 and 3. The consistent quality of the rest of Dynasty makes up for its only low point, Dirty Livin’. Dynasty defeating Love Gun is almost making me rethink my 1-10 scale, but I am going to insist on judging these albums as the entire work, the album as a whole, and I can’t give the victory to Love Gun just because I love I Stole Your Love so much. So there you have it, I guess Dynasty stole my love. Winner: Dynasty


Wally: Interesting match up here, let’s see. Love Gun contains “I Stole Your Love” quite possibly my favourite Kiss song of all time. When they opened up the Hot In The Shade Tour with it, I almost lost my mind. I also love “Tomorrow and Tonight” and “Plaster Caster”. I am incredibly sick of the title track and the rest is so-so.


Dynasty on the other hand doesn’t deliver any one totally knock out song but overall I think it delivers a more consistent listening experience. It seems to flow and as previously mentioned in round one, I fell in love with “Hard Times” when I was a kid. Dynasty certainly gets my vote from the heart and this time that’s enough. Winner: Dynasty