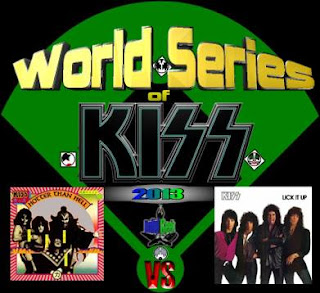 Chris: The inner-Vinnie Vincent fan in me really wants to shake things up and go with Lick it Up. I absolutely adore that album and all of the swagger, attitude, and technical proficiency that it brings. To this day, it stands out as a ferocious product from KISS and truly builds on what they had started with Creatures.

But, I have to listen to my heart and my heart belongs to Hotter than Hell on this one. Horrible production be damned! The instinctual, primal songwriting of KISS is firmly in place and it’s one of the most honest that the band’s ever produced. How I’d love to get hold of the master tapes and remix this great slab of KISS in its heyday. Winner: Hotter than Hell

Rich: Well, I myself rather enjoy the non make-up era KISS, being as that’s where I started my forray into KISSdom, but it appears that I’m outnumbered as Lick It Up is the last man standing so to speak.  Judging by what I listen to more often, it’s hands down Lick It Up.  The only thing from Hotter Than Hell that ever makes one of my playlists is Parasite, whereas the heavier stylings of All Hell’s Breakin’ Loose, Young & Wasted, Exciter and Not For The Innocent do find their way through my speakers from time to time.  Both albums represent different eras and facets of the band and Hotter Than Hell opened up some doors for the future, but I have to declare Lick It Up as the winner here (I fear I will be it’s only supporter however). Winner: Lick It Up

AAron: I know that it’s a reoccurring theme with me, but as awesome as Lick It Up is, the non-make up era never truly matches up to the original four. Great songwriting and vocals from the band, and better than solid performances by all members. A nice heavy album! Remember, this is KISS proving that they didn’t need the make-up to kick our asses and they proved that they didn’t, but in 1974 they were fighting to prove they had the right just to exist. Nothing is better than those early KISS albums, even as excellent as they were for most of the early 80’s. Winner: Hotter Than Hell

Wally: Ok, this sucks. I know who is moving on to the third round but it doesn’t mean I have to be happy about it! Hotter Than Hell is filled with some classic songs no doubt but I loved Lick It Up. It breaks my heart that this album is hanging up the jacket in Hell’s Kitchen today.

Lick It Up was so much a part of my youth, I remember a friend of mine and I scripting out a movie we were going to make to the songs of Lick It Up. “Not For The Innocent” had this army marching through the cemetary of my home town, it was a very powerful scene from a movie that was never made. Live, I loved these songs “Fits Like A Glove”, “Young and Wasted”!. I also think “A Million To One is one of Paul’s absolute best songs! Brain says Hotter Than Hell, my heart SCREAMS LICK IT UP! Oh Hell I am voting with my heart for all the good it’s going to do here Lick It Up for the win. Winner: Lick It Up