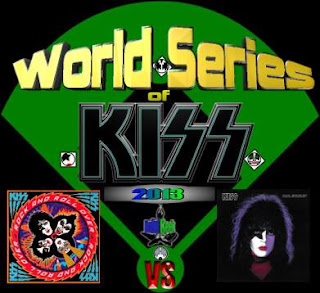 Chris: I caught hell last time for elevating Paul Stanley above Dressed to Kill. After much introspective contemplation (and other big words like “gymnasium”)……I still stand by that decision.

As I said before, Paul Stanley (1978) is an awesome piece of work put together by an artist that was out to prove he was about more than makeup and bombs. There are a lot of dynamics to this album and that works in its favor.

Rock and Roll Over is KISS going back to the meat and potatoes SOUND but I sometimes think people overlook the maturation they had gone through as songwriters from Destroyer. This was more rudimentary in sound but there’s no way Paul could have written something like ‘I Want You’ or ‘Hard Luck Woman’ during the Dressed to Kill sessions. Paul may like to call Eddie Kramer a glorified engineer but he can’t deny that he was able to pull that original chemistry out of them which was no easy task by that point. Winner: Rock and Roll Over

Rich: Once again I know that I’ll get flak from my Decibel Geek cohorts among others for my choices here in this round two of The World Series of KISS, but I like the Paul Stanley Solo album and I’m not afraid to admit it (please don’t kick me off the staff Chris & Aaron!).  While I make this statement and indeed voted as such, I am surprised that Paul Stanley made it through the first round over Dressed to Kill.  I recently saw some clever hubbub on the Decibel Geek staff forum as one of my esteemed colleagues expressed his displeasure that this Paul Stanley Solohad beaten out Dressed to Kill in the first round of match-ups.  He cleverly used the song titles to express his displeasure and I got chuckle from the word play.  Rock and Roll Over for me is one of the least listened to in my collection, hell even Music From…The Eldergets more rotation that it does.  With the good songs all appearing on other compilations I have no burning need for the actual album (a similar situation with many of the early KISS recordings).  For me, if you balance out the high points with the low ones of Rock And Roll Over, Paul Stanley’s more consistent, even, average compositions make for a more enjoyable listen cover to cover.  Paul hits another homerun with The Meister. Winner: Paul Stanley

AAron: I’m pretty shocked to see that Paul ’78 beat Dressed to Kill. I just can’t understand how that is even possible. Round 2 finds Paul Stanley in another seemingly unwinnable situation, but this is Paul Stanley we’re talking about, he beat Dressed to Kill to get here. My defense is the same as the first round. Paul Stanley is a very close second best of the ’78 solo albums, and a stellar album on it’s own, but none of the guys could ever do alone what they were doing together in the early 70’s. It could have been Clive Burr, Dave Murray, Steve Harris and Paul… Stanley. In the end Rock N Roll Over trumps anything that any KISS member has ever done or could ever do solo… just like Dressed to Kill! There are KISS albums that I like less than Paul ’78, but Rock N Roll Over ain’t one of ’em. Winner: Rock N Roll Over
BJ: First off, I feel I must express my outrage at Dressed To Kill being knocked out in the first round. As stated previously, I have great affection for Paul’s solo album but in all honestly half the album kinda sucks, whereas every song on Dressed To Kill is great. An album is the sum of its parts, and while Paul Stanley’s solo album might contain a couple of my favorite KISS songs it also contains a few real clunkers. Dressed To Kill contains zero clunkers. Therein lies the injustice of it all! Here’s how I feel about Paul Stanley beating out Dressed To Kill: it ain’t quite right, but I’ll move on. Rock and Roll Over vs. Paul Stanley is a much fairer contest. I’m going to have to employ the dreaded 1-10 scale on this one.

Rock and Roll Over

And there you have it, judging Paul Stanley’s album by the sum of its parts and not just by how much I love Wouldn’t You Like To Know Me and It’s Alright I come to the LOGICAL conclusion that the sub-par quality of a few of the songs drag Paul’s album down and even though Baby Driver is my least favorite song of the entire bunch it does not drag the quality of Rock and Roll Over down enough to make the match up competitive, Rock and Roll Over wins 6.7 to 6.5. Winner: Rock N Roll Over

Wally: Now I too will stand by my decision in round one, Paul Stanley’s 78 solo record is still a great rock n roll record but now it sits up against Rock N Roll Over. I actually went back and played them both back to back to make sure I could live with my decision here.
I have to say, Rock n Roll Over might just be Kiss’s strongest album from the classic lineup. Raw, gri
tty rock n roll tunes played straight up, no nonsense. This isn’t just a great Kiss record it’s simply a great rock record. If Shock Me was on this album it might just be perfect. So I am sad to say that it’s probably the end of the road for Paul Stanley’s solo album. Winner: Rock N Roll Over
Round 2, Game 5 Rock N Roll Over takes it. Score 4 – 1