World Series of KISS – Round 3 – Destroyer Vs Hotter Than Hell 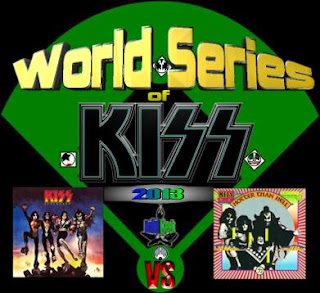 Rich: Again another fairly easy choice for me.  While neither of these are particular favorites of mine and I find Destroyer to be rather over rated.  I prefer the hunger that you can almost feel on Hotter Than Hell as they struggle to establish themselves.  For the cut Parasite alone Hotter Than Hell defeats anything found on Destroyer (with the possible exception of Do You Love Me)…..begin hurling insults as you wish.  Hotter Than Hell for the win. Winner: Hotter than Hell

AAron: It’s a pretty common theory that Destroyer is the greatest of all the KISS albums. I believe that by what I’ve read over the years that even Gene and Paul consider Destroyer to be the gold standard that all KISS albums must live up too, and it’s an opinion that is hard to argue. To me, the hype that accompanies Destroyer has always been a little too much. The song, “Beth” is the biggest hit single KISS ever had, and arguably the reason that KISS became the phenomenon that they are, but to me it is their worst song. This is a really tough one to call because (with the exception of “Beth”) these are both stellar albums. If this was about the covers, Destroyer would win, but to me it’s about the songs. Because of the harder edge and grittier feel, I give the advantage to Hotter Than Hell. No sappy love ballads. I say no to “Beth”, and yes to “Let Me Go, Rock N Roll”! Winner: Hotter Than Hell

Chris: A very tough choice, and one that I hate to have to make. While Hotter than Hell has a fine slab of early KISS in its glory, the bad production hinders it from beating a milestone such as Destroyer. While I can’t stand some songs songs on Destroyer (Great Expectations and Do You Love Me), the pluses of Detroit Rock City, King of the Nighttime World, and God of Thunder combined with Ezrin’s quantum leap in production, give it the win. Winner: Destroyer

Wally: Once again I had to sit down with the headphones and sink my teeth into both albums before casting my vote. When I started, I figured my vote was pretty safely going to Destroyer but wow did I look at Hotter Than Hell in a different light. I am not sure why but that album kinda dropped off my radar as I always leaned towards the debut album when I ventured back into the first three records.

Hotter Than Hell flat out knocked me on my ass. Such a great album and not a single filler song. Sonically, Destroyer sounds amazing, has a few gems but doesn’t kick my ass all the way through. They remastered Destroyer which really didn’t need it, Hotter Than Hell should have gotten that treatment. Winner: Hotter Than Hell

Round 3 Game 3, Hotter Than Hell takes out Destroyer Score 4 -1