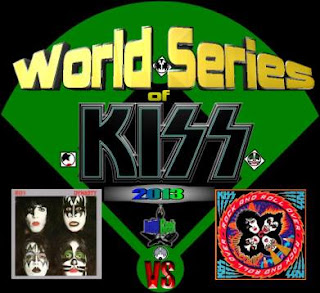 Rich: Here’s another great and easy choice for me as I vote with my heart again.  I am not afraid to cast the lone vote here for Dynasty which I’m totally surprised even made it this far.  It was an early addition to my collection and I love songs like Charisma and Hard Times, bash it for it’s disco feel all you like, but there’s some great rock to be found here.  Everything I need from Rock and Roll Over I can get through other compilations.  As it’s my favorite album of those remaining in the competition – Dynasty to victory m/ Winner: Dynasty

BJ: Well, when I employed my 1-10 scale in previous match-ups Dynasty averaged a 7 while Rock and Roll Over averaged a 6.7. That would seem to indicate that Dynasty wins this one. But wait! Screw that. I know I’ve argued that it all comes down to the quality of the songs, but I’m realizing I was wrong, that isn’t always the case. I have great affection for the concept of an album, not just as a collection of songs, but an ALBUM as a singular work, a cohesive statement. That band at that moment, a sort of time capsule. Rock and Roll Over is just better, man. It has a better cover, better production, and it really flows, it’s an album in every sense of the word. I am not a fan of Baby Driver, but it’s way better than Dirty Livin’. Baby Driver doesn’t interrupt the flow, I wanna put Rock and Roll Over on right now and listen to it all the way through, it’s a solid piece of work. I would never want to listen to Dynasty all the way through because I would never want to listen to Dirty Livin’. The second side of Dynasty flows, but the first side has multiple personalities. 2000 Man doesn’t fit, it transcends. I think Dynasty is a great record, but my heart is with Rock and Roll Over, at least at the moment I’m writing this. Eddie Kramer is the man! Winner: Rock N Roll Over

AAron:  This is harder than choosing between The Elder and Peter’s Solo Album! RNRO is so good. Easily one of the greatest albums of all time! Dynasty is easily one of the most underrated. They call it the disco album, but it’s packed full of rockin’ tunes that I love. Especially the Ace Frehley tracks, I just wish that he would’ve been a featured vocalist earlier in the career of KISS. As much as I love Dynasty, I’m starting to think that Rock N Roll Over may be the dark horse of this entire series. RNRO in a squeaker… before I change my mind. Winner: Rock n Roll Over

Chris:
Okay, I’m probably going to be crucified for this but I’ve gotta go with Dynasty. This album has aged wonderfully and I really enjoy the diversity in the album. Of course, it’s recorded by a fractured KISS lineup but I think the songwriting is very strong, Ace’s added contributions help, and I, personally, like Vini Poncia’s production style on the album. Both amazing albums but I’ll go with the oddball choice here. Winner: Dynasty

Wally: Ok, so I spent a couple hours and did a full listen to both these wonderful albums, before I make my choice here I must say this. DAMN I LOVE KISS! With that out of the way I am simply going to give my vote to Rock n Roll Over. It had been a while since I listened to Rock n Roll Over and I have to say its a gritty fun rock n roll ride from top to bottom. KISS at possibly it’s finest hour. Winner: Rock n Roll Over