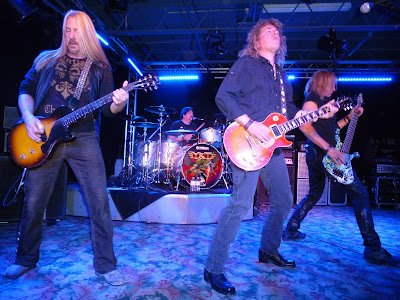 When I got wind that Y & T were heading to Toronto for a show at the Rockpile, I raised my eyebrow in curious disbelief. I mean as far as I know, the last time this great band played in Toronto I was 15 years old! That was back in 1985 when they were here at Maple Leaf Gardens supporting Motley Crue on the Theatre of Pain Tour. Such a long time ago but a concert I remember fondly as one great night of Rock n Roll. 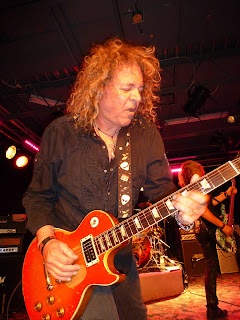 Throughout the years I have always enjoyed my Y & T albums, always though they were a great band but had almost given up on ever seeing them live again. In fact they had pretty much completely disappeared as far as a live act up in these parts. So I must give a shout out to Steve and the Rockpile for getting these guys to head North of the border. I was curious though, I know the band has had a long career but would the absence of live shows in this neck of the woods and the fact that it was a Tuesday night affect the turnout. I had no need to be concerned as I soon learned that a LOT of people had missed this band and in fact some people drove over 4 hours to catch the show. The Rockpile was packed, and packed early. 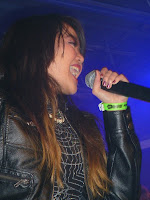 Local act and no stranger to the Decibel Geek readers, J’Nai got things rolling as they tore into Heart’s “Barracuda”. Racing through a very short set, J’Nai this band is really winning over fans each time we see them live. I spotted more than a few J’Nai T-Shirts in the crowd and watched as those same fans sang along with the band’s original songs. In fact one fan near the front, was so enthusiastic that Jeannette (the band’s pint sized vocalist) shared the mic in an impromptu duet, and the guy sounded pretty good! “Accident” and my personal favorite “Skipping Stones” had the heads banging with their high energy stage show. Closing the set, they thanked Y & T for the chance to share the stage and broke into G N R’s “Welcome to the Jungle.” 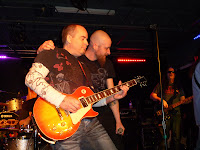 Next up was Hand Over Fist, a new band on our radar that I had just found out about that very day. They delivered a solid set of heavy guitar rock featuring all originals off their “Cry Out” CD. Nothing like the sound of a Gibson Les Paul, and with both Michael Ragusa and Darren O’Driscoll wielding one, makes for some crunchy rock n roll. “Black Cherry”, “Ridin” and “It Doesn’t Matter” were highlights from a solid set that definitely got the crowd warmed up on a Tuesday night. I look forward to seeing these guys again.

Some would say that Rock n Roll is a young man’s game. To that I will yell loud and clear…bullshit!, and in fact I think maybe it’s the Rock n Roll that helps to keep us young. The last time I saw Y & T was 28 years ago, that was 1985 and by then Dave Meniketti had already been burning a rock and roll trail with Y & T for over a decade. I say this because I can only assume that Dave Meniketti and his band are certainly sipping from the Rock n Roll fountain of youth. How else can you explain the 2 hour and twenty minute, 21 song, heavy metal feast that these veterans thrilled us with? Opening with “Black Tiger” the band was off and running on what would be one of the best shows I have seen in years. The 2013 band , Dave Meniketti (guitar/lead vocals), John Nymann (guitar/vocals), Brad Lang (bass/vocals), and Mike Vanderhule (drums/vocals) came to rock and that’s exactly what they did for a packed house of loyal Y & T fans. Dave mentioned early on that “we were in for a long night” as the band just have too many songs to choose from and with 12 studio albums to pick from he was right. 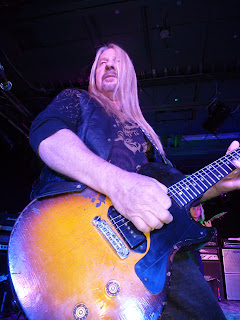 Dave also made mention of how long it had been since the band had been up to these parts but promised he would add Toronto to the annual touring schedule and I can’t wait to see them same time next year! The set list had something for everyone, for the casual listener “Meanstreak”, “Don’t Stop Running” and “Summertime Girls” were there. For the die hards, “Hard Times”, “Dirty Girl”, “Rescue Me” and “Squeeze”. They also represented their latest album FACEMELTER with a couple of tracks “Shine On” and “I’m Coming Home”. The show flowed well never letting up on the intense energy of these songs.

Dave is a beast on the guitar and plays with such feel and emotion that I have to add him to my “Guitarists You Need To See Before You Die” list. Add to that one Mr. John Nymann who started the night out on a well road worn Gibson Les Paul. This guy takes a backseat to nobody on the six string and together with Dave its (pardon my language) Fucking Magic! It’s one thing to make you rock with the songs you know and love but when these guys lit into something unfamiliar I was transfixed and literally taken on ride. 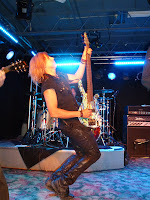 Dave made mention one more time about choosing songs for the show and although he figured it was a pretty solid list, he knew there would be songs he missed. For that he vowed a different set list when they return ne
xt year. Huh, changing up a set list? For your fans? What a great idea! Kiss are you listening? (Sorry was that out loud?)

The printed set list of 20 songs actually missed “Open Fire” that newest member, bassist Brad Lang called out for during the encore made the show a perfect blackjack hand of 21 songs. Impressive for a band that have been going strong since 1976. Hell, impressive for any band out there to match a show like this. Y & T, can’t wait til next year!