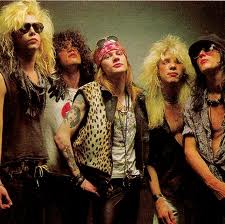 Every once in a while an album is released that simply taps the collective unconscious. An album that seems to be released by the right band, at exactly the right time and the world sits up and takes notice. Micheal Jackson’s Thriller, Fleetwood Mac’s Rumors, AC/DC’s Back in Black come to mind as just such albums.

In 1987 this alignment of the universe took place for “five street urchins living under the street”. Guns and Roses released their debut album to an unsuspecting world on July 21st of that year. 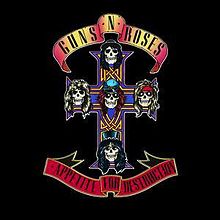 As a seventeen year old metal geek at the time, I had heard all about the band, had heard the lead off single “Welcome to the Jungle” and was more than willing to lay down my cash for this new group of sleaze rockers from LA. Little did I realize, I was holding what would become one of the most influential pieces of hard rock music of all time.

The video for “Welcome to the Jungle” was periodically being played on the Canadian video shows, and the hard rock stations were playing the single. This was nothing unusual as Hard Rock and Heavy Metal was all over mainstream radio at the time. The years 1985-1990 was what I like to remember as the golden age of metal. Def Leppard, Whitesnake, Motley Crue and Poison were all over the airwaves.

Appetite, however was a little bit different than the glossed up production that most of the “radio friendly” hard rock bands were releasing at the time. Guns and Roses were just a little dirtier, just a little sleazier and certainly a little more “on the edge” than any of their contemporaries. This was certainly part of their appeal. 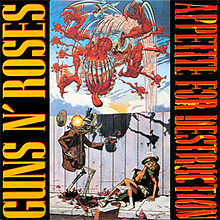 Producer Mike Clink captured the Gunners with a sound so cut you to the bone raw yet flawless in sound quality.  Sonically, this album still stands up as one of the best heavy metal albums of all time. Axl’s unique and powerful voice could peel paint from the walls as he tore through each song like a crazed animal.

Production aside, there were other reasons that this album achieved what it did. Every single song was a knock down, drag you through the dirt thrill ride. There is not a “filler” song on the entire album, even the ballad “Sweet Child of Mine” seemed tough and real compared to the usual fluff on the radio. Guns and Roses seemed to capture the seedy underbelly of Hollywood California and poured all those emotions into their debut album. The songs definitely told “their” story, they resonated with teenagers all over the world.

The explosion of Appetite for Destruction had a long wick, it wasn’t an overnight sensation. I can remember the Cult coming to Toronto with this unknown opening band and at the time I was unable to attend the show. One friend of mine was a big Cult fan and I gave him some money to grab me a t-shirt, a Guns and Roses t-shirt. I would wear this proudly for the next few months before anyone at my high school took any notice.

Then suddenly it was as if the light switch was turned on and Guns and Roses was EVERYWHERE! The album went crazy and Guns and Roses went from underground “metal’ to mainstream and accepted by the masses in the blink of an eye. Appetite for Destruction wasn’t just for breakfast anymore! I remember one day at school at lunchtime, standing in line at the cafeteria. As we shuffled through the line with our food trays a “jock” friend of mine turned and said to me “hey Wally, I have to admit you were on to these guys almost a year ago, nice!” 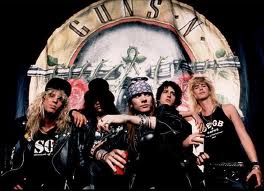 Appetite for Destruction went on to sell over 28 million copies to become one of the most influential hard rock albums in history. Unfortunately it would be the only full length release with the five original members, Axl, Steven, Duff, Izzy and Slash. The band would never again be able to produce such a powerful and cohesive piece of work. Before long ego, drugs, ego, booze, ego, MORE drugs and even more ego would cloud the judgement and eventually rip the band apart. In 1987, however Guns and Roses were a lean, mean hungry machine leaving a trail of “destruction” in their path and leaving an album that was damn near perfect.