On Friday, August 17th Kill Devil Hill rolled into Toronto for a show at the Rockpile. For those that might not have gotten the memo, Kill Devil Hill is the new band featuring bassist Rex Brown (ex Pantera, Down), drummer Vinny Appice (ex – Sabbath, Dio), guitarist Mark Zavon (ex-WASP) and vocalist Jason “Dewey” Bragg (ex – Pissing Razors). They have released their first album, simply entitled “Kill Devil Hill” and are out on the road working their asses off to bring this record to the fans.

When I first heard of this new band I checked out their website and watched the video for the song “Strange”. When the song kicked in and I heard Rex’s bass sound kick in, I was hooked. One listen, one fan and I bought the album. I was not disappointed, the album is a killer mix of great songs, From high octane rockers like War Machine and Voodoo Doll to the Sabbathesque mid tempo rockers Hangman and We’re All Gonna Die to the haunting and beautiful “Mysterious Ways” This album rocks and I was stoked to hear they were headed for Toronto so I could check this new band out live. 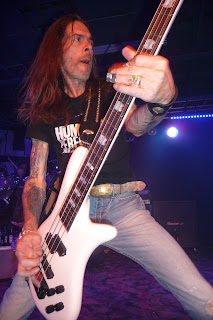 Before the show I had the amazing opportunity to sit down for a few minutes with Rex and Vinny to talk about the band, the album and what’s going on…

Decibel Geek: So how did Kill Devil Hill come to be?

Rex: We just kind of all met up, well Vinny gave me a call said I got this band. To make a very short story…short (laughing). Vinny called me up and said I have these demo’s and asked me to play on them and I said absolutely. So I started getting into them and played some bass on them, they liked what I played…

Vinny:  Well we liked it, it was pretty good

Vinny Well it wasn’t great but…

Rex It wasn’t great?, thank you (lots of laughter) 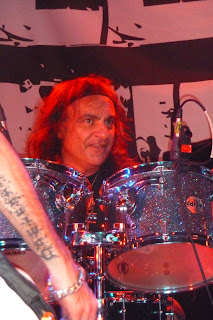 Vinny: This guy is the baddest motherfucker I have ever played with. I have played with some good guys but he is the best.

Rex: Aw that’s too sweet, I would kiss you but I wouldn’t do that in public.

Decibel Geek: So tell us a little about the album? Where was it made?

Rex: Did it at Pacifica in North Hollywood with Warren Riker actually managing the boards, we pretty much produced the whole damn thing but we had to have it mixed like three times.So we met this guy Jay Rustan that really for everybody’s ears that’s what we all heard for the sound of the record..

Vinny: He just made it (the album) SHINE!

Rex: Unbelievable, I actually call him the fifth member of the band, he really knows how we want to sound

Vinny: He’s one of those guys that you can send him the tracks and then just over the phone you can say “just a little of this or less of that” and in fact that’s what we did. 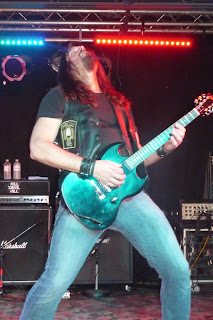 Rex: I mean I am in Texas, these guys are in California and they didn’t even have to go down to the mix you know.

Vinny: He just captured everybody’s sound I mean Rex’s bottom end and the way he fucking plays and the way I play and that’s whats important.

Rex: And then what we had done, we had gone out for about five weeks or so of shows and then we came back and Dewey re sang like three quarters of the record, his vocals were so powerful from us getting tightened up. That was just another plus you know

Decibel Geek: The tour schedule you guys are on is insane, you are like doing 6 nights in a row more than once. In fact tonight is night 3 of 6 for you.

Vinny: But you know what it’s fun, we had two days off a few days ago and we were like “what are we gonna do?” “nothing to do”. We love playing together so as long as the travels not to bad we would rather be playing. 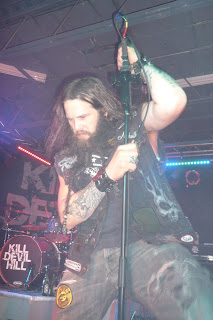 Rex: Dude, it gets insane. Like every night we come up with something different and it’s very cool. You dont expereince that a lot of times in bands, you play the same stale shit every fucking night> To me it’s like I look back and this guy (motioning to Vinny) is going fucking nuts and I go “You Showoff!” (laughter) but you know I catch a groove with him and it takes off from there. To me the hunger is back, I have had the barracades keeping people 50 feet back but these people are in our faces every night. They are starting to know the songs now, we are doing this from the ground up. Its invigorating every night.

Vinny: The music carries you through if its like oh man its the sixth show but then we’re looking forward to it. It’s a great band and we love playing together.

Vinny: I like “We’re All Gonna Die” I like em all Drawbridge at the end is really cool, we have changed that one up a bit 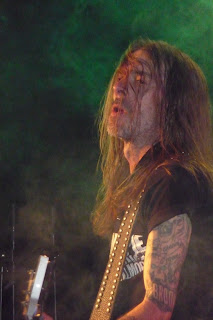 Rex: I mean we are not changing the arrangements completely you know, just adding on to them. For me though it’s “War Machine”

Decibel Geek: If you could, descibe to me the personalities within the band?

Rex: Personalities? I dont know dude we all have our different influences and we bring that all together. There is an aura between every person in this band that makes the aura of t
he whole band so its bigger than the sum of just one part, you know. You’ll see it tonight.

Vinny: That’s the sign of a good band. You know those magic bands that just those 4 members or 5 members where if you replace one it’s just not the same.

Rex: You get one jackass, fuck it, it aint gonna work

Vinny: There is just certain combinations that work and this just happens to be one of those bands. 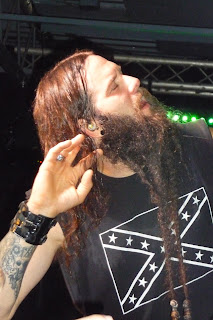 Decibel Geek: So Vinny, one of my first concerts back in the day was you with Dio back on the Sacred Heart Tour

Rex: oh wow, I forgot all about that record, good record.

Vinny: Well it wasn’t as good as the others, too many keyboards on it. The Last in Line , Holy Diver those were the records

Rex: Oh absofuckinlutely god almighty when I first heard that, I remember when I heard Holy Diver. I was in Texarcana and i remember getting that record and putting it on at some chicks house and going HOLY SHIT!

Vinny: See that was a magic band, when we got together you could feel it. There was just something right about it and that’s how I feel about this band. The whole band as one as Rex was saying, this is going to be good.

Rex: We are going to play every fucking place we can possibly play, take this to the masses you know? and then we’ve already written half another fucking record, already. 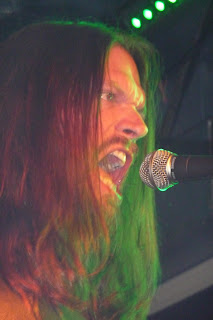 Decibel Geek: OK guys, one last question. Name me the song you wish you had wrote? 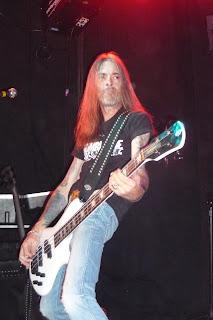 Later that night the band took to the stage, launching into their set with  “We’re All Gonna Die”. As Rex promised, Kill Devil Hill delivered the goods. Wielding his Spector bass like a weapon, Rex and Vinny seemed to be thoroughly enjoying themselves as they rocked the house. Mark Zavon is a guitarist that has finally found his home and Jason “Dewey” Bragg possesses one of the best set of metal pipes on the planet. Kill Devil Hill played through their entire debut album with note for note accuracy and teased the crowd with a little Black Sabbath “War Pigs” sing along. Far and away one of the best concerts I have seen this year.

Vinny mentioned that every now and then you get to hear a “magical band” where everyone is working as one. On Friday, August 17th, I witnessed just such a band…thanks guys.

As the last notes were still ringing through the PA speakers, all four members left the stage and headed out into the club to party with their fans. Signing autographs, taking photos and drinking some beers with the crowd. It was very refreshing to see these legends of heavy metal being so gracious with their fans and a good time was had by all. Cheers to Kill Devil Hill.