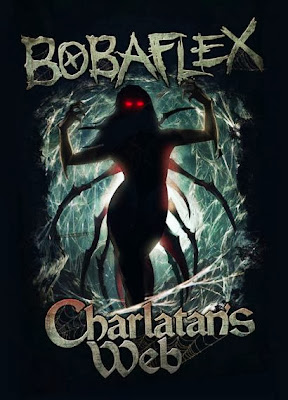 Summary -Bobaflex – Charlatan’s Web – Album Review Bobaflex’s new album Charlatan’s Web is one the best hard rock releases of 2013. Nine lean, muscular and melodic tracks clocking in at just over 30 minutes = or > than their last release Hell in my Heart. There’s no “value-added” bullshit to be found cluttering up the mix and infecting your hard drive; its solid to the last second leaving you addicted, sore and aching for more.

Street Value: $10 for 9 tracks and a cool intro that all qualify for “I’d buy that for a dollar!” status.

“It’s over! It never began. An intelligent person would just give up. Keep dancing in the gutter you scumbags, it’s where you belong” – Love Letter from a Booking Agent (Charlatan’s Web Intro)

Despite difficult challenges with management, their record label going bankrupt and just trying to survive in today’s music industry, Bobaflex has continued to push through and released their best album to date, Charlatan’s Web. And their resilience and pure lust for rock shines on every track.

Bobaflex’s latest album, Charlatan’s Web, has been in continuous rotation since it was released a few weeks ago. If it was a cassette it would already be reduced to static.  I first discovered Bobaflex last year at Rock on the Range, an annual fest in Columbus, OH that features about 50 bands on 3 stages in 2 days. Typical of fests, the lineup poster lists bands in a “seeing eye chart” style with the lesser known acts in decreasing font size. Researching the bands in tiny print prior to the show is key as the roster is chock full of steaming turds on your journey to the headliners and if you don’t plan ahead, you are in for a long day.

This research usually ends in me weeping openly about the current state of music but I’ve found several great new (new at least for me) bands from past Rock on the Range lineups including
Danko Jones, Black Stone Cherry, Heaven’s Basement, Charm City Devils, The Sword, Volbeat… and Bobaflex.

Let’s be honest, all the good band names are gone but at first glance Bobaflex sounded like a Creatine-based supplement at GNC or Mike Tyson’s answer to the question “What’s your favorite Star Wars character?” 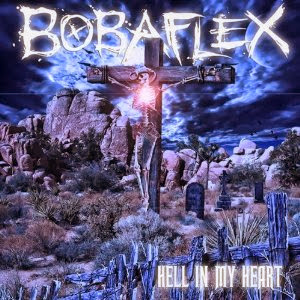 I pulled up the album Hell in My Heart. The cover looked like Screamo or Death Metal.

I hit play to confirm I would be avoiding Bobaflex at all costs and found a band that, according to number of plays on iTunes, was one of my favorites of 2012 . An intro almost as badass as “In the Beginning” from Crue’s Shout at the Devil kicks in and leads into “Chemical Valley” and “Bury Me With My Guns On.”  Holy Fuck! The album continues to be killer up to “Last Song” (strangely not the last song) and a cover of “Sound of Silence” that somehow makes Simon & Garfunkel sound like the original Metal Gods.

The lead vocals are shared between brothers Shaun and Marty Mccoy and often the verses are sung in harmonies with the entire band contributing.  And don’t think this is all studio wizardry, not only did they prove they can pull the music and vocals off live as I witnessed at Rock on the Range, they also brought an insane amount of energy and shuffled around as if the stage was made of hot coals.

I mention their previous album Hell in my Heart because it’s the blueprint used for Charlatan’s Web. Unlike most bands that attempt to stick to a winning formula but end up with diminishing returns, their latest builds on that foundation bringing their songwriting, performance and production to the next level.  Mutt Lange and Dr. Feelgood-era Bob Rock would be proud.  The bridges, vocals and other little touches elevate every track and the streamlined arrangements add power as no song ever wears out its welcome.  Even the album cover is an improvement.  A silhouette of a hot spider chick with red eyes inviting me into her web?  Sold.

I’m Glad You’re Dead:  “My heart glows, as you decompose.” The best combo of tongue in cheek humor and genuine hatred since GNR’s “I used to love her.”  This song simply destroys.  I dare you to not keep replaying the Beatles inspired “I’m gonna have a party ’cause your gone” section.

School For Young Ladies;  This song is so over the top its genius.  A cheerleader sung chorus, a”Christine Sixteen”-ish spoken section from Principle Mccoy, and a girl named Candy Sexton who “walks down the hall always winking at her teachers, she’ll let you see her panties when she’s walking up the bleachers.” Think classic Bob Ezrin-era Alice Cooper in scope with a side of Meatloaf.

Bad Man:  The first single and the most classic rock sounding one of the bunch with a great riff and solo. Vocals are a bit lower in the mix vs. the rest. If you are thinking of applying for the Bad Man po
sition, here are the minimum qualifications:

Buy this album immediately, if not sooner and go see them live.  You’ll thank me later.