2013 marks the 40th year of existence for Hottest Band in the Land. So, it makes perfect sense for us to use episode 73 (as in, 1973) as a chance to time travel to numerous destinations that played a part in the overall history of KISS. 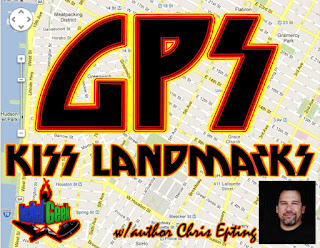 Joining on this global KISS trek is author Chris Epting. Chris is the perfect guest for this conversation as he’s written a number of travel-related books on different eras of pop culture as well as his recently-released e-book, ‘All I Need to Know I Learned from KISS: Life Lessons from the Hottest Band in the Land.’ This book is filled with stories of how being a KISS fan shaped Chris’ life and affects him even today. If you are a hardcore KISS fan, this book is definitely for you as it will certainly elicit some familiar emotions.

The birthplace of KISS. This location is the spot where Paul, Gene, & Peter first auditioned Ace Frehley and the band took shape. The location is now next door to a comic book store that has an inventory that includes KISS comic books. Go figure.

The location that allowed KISS to secure management as Bill Aucoin, Sean Delaney, & Eddie Kramer all witnessed this hungry, young band that wore lots of makeup and electrified the audience in this downtrodden ballroom. A great history of the Hotel Diplomat can be found HERE.

Site of some of the earliest KISS shows before they became a touring act. Coventry changed their name from ‘Popcorn’ just as KISS began their run playing the location. Footage of one of their Coventry performances is on the KISSOLOGY series of DVDs. A fantastic in-depth history can be found HERE

The site where KISS’ dream was realized. During the band’s earliest years, while performing at dive bars all over the country to sparse crowds, the band would psyche themselves up by imagining that that night’s venue was “the Garden.” This is also the site of this week’s guest Chris Epting’s first concert in 1977.

The site of Chris Czynszak’s first KISS concert, Starwood is no longer in existence but it provided a venue for many KISS tours during the 90’s and early 2000’s.

The front door of this church in Manhattan was the inspiration for the door used on the Music from the Elder album cover.

The site of the infamous KISS invasion of Cadillac! What a lot of us would give to time travel back!

The site of KISS’ foray into the makeup characters we know and love today. It’s rumored that their first show at the venue, which was sparsely attended, featured the band covering ‘Go Now’ by The Moody Blues.

A very KISStoric site as it was the venue that hosted the band’s “coming out” party to a shocked group of industry onlookers as the band upstaged headliners Iggy Pop and Blue Oyster Cult. This venue was also the site of Eric Carr’s debut performance with KISS in 1980.

Site of recording for parts of Paul Stanley (1978 solo album), Killers, and Creatures of the Night. ‘Nuff said.

Site of recording for Hotter than Hell & parts of Paul Stanley (1978 solo album).

Now owned by Six Flags Corp, Magic Mountain was the shooting location of the infamous KISS Meets the Phantom of the Park television movie from 1978. Loved and hated by the fan base, the park still features the Colossus roller coaster that is featured prominently in the film.

Site of KISS’ appearance on the Mike Douglas show. Filmed in the basement studio, the show featured a bizarre interview panel with Gene Simmons on stage with comedian Robert Kline and comedienne Totie Fields who skewered the demon in front of a national audience.

While ’30 Rock’ is well known for a whole host of famous television moments, none is more important to KISS fans than what took place on Halloween night in 1979 as Ace Frehley stole the show much to Gene & Paul’s horror and Peter’s delight.

The home recording studio of Bell Records with a history dating back to Buddy Holly, the band used this studio to record their self-titled debut album in 1974.

The house that Hendrix built has been the home to many im
portant moments in KISStory including the Wicked Lester recordings, first album demos, Dressed to Kill, Peter Criss (1978 solo album), Dynasty, and Asylum to name a few.

The site of KISS’ debut to the press in a special concert presented in January of 1974.

A very pivotal location in KISS’ history as the band broke attendance records in the 70’s previously held by the Beatles and has hosted the band in each decade since to much fanfare. Japan’s love of KISS is timeless.

The site of KISS last show in makeup (at the time). While the band had hit a major low point in popularity in America, the fans in South America were only too happy to fill mammoth soccer stadiums and show the band that they ‘love it loud.’

Site of KISS’ first-ever stadium show in 1976, this appearance seemed to help mark KISS’ transition from popular group to superstars.

Location of the official announcement of KISS’ reformation in 1996. The event was emceed by Conan O’Brien and attended by fans and press from all over the world.

Location of KISS’ first appearance in makeup with the original band at the 1996 Grammy Awards. The band only showed up to present an award with Tupac Shakur and didn’t tip their hand regarding a reunion. But the writing was clearly on the wall.

Site of KISS’ appearance on MTV Unplugged, the night ended on a high note with Peter Criss and Ace Frehley joining the band for a few songs and encores and sparking the reunion that would take shape shortly after.

Site of KISS’ appearance on the 1996 MTV Video Music Awards, KISS originally chose Ellis Island for their appearance but couldn’t secure proper permits in time. Instead, they put on a blistering performance in the shadow of the Brooklyn Bridge that has gone down as one of the musical highlights from the reunion of the original band.

An 800 seat facility in Nashville in the early 1970’s that hosted a number of lesser-known acts working their way up the ladder that included Ted Nugent, Bruce Springsteen, and a face-painted group known as KISS on their first tour. Die hard KISS fans will recognize the venue name due to a handful of photos of Ace Frehley donning their logo on a t-shirt in the 70’s.

Get Chris Epting’s new E-book ‘All I Need to Know I Learned from KISS‘!

*Editor’s note*: The inspiration and/or motivation for this episode/article came from author Chris Epting’s background writing travel-related pop culture books & articles combined with his love of KISS and recently published e-book on KISS. Any similarity to previous articles published on KISS historical landmarks is purely coincidental. No copyright infrigement intended.