In the still of the night… 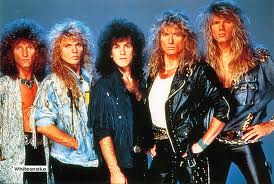 An Englishman, a Cuban American, an Irishman, an American and a Dutchman play in a rock band that made only ONE album together; but took this album and rode it like they wrote and created the whole thing. And they sorta did. Here’s the short version of the story of Whitesnake….

In 1985, Coverdale entered the studio to record  ‘Whitesnake’ with John Sykes, Aynsley Dunbar and Neil Murray. Now, according to who you speak to, read, etc. Coverdale wanted to throw in the towel after Rock n Rio when he and Cozy Powell started to fight on the regular. But the honchos at Geffen saw big money in what he and John Sykes could do, so with Geffen’s urging, Coverdale moved the snake train forward.

Coverdale, Sykes and Murray started writing for the album that spring(85 or 86) and wrote a few songs from that. The two most known was ‘Still of The Night’, and ‘Is This Love’.
1986, brought major changes to the group…literally. Due to personal issues with EVERYONE, Coverdale cut the cords on all that played on Whitesnake, except two… 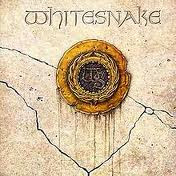 Now, with that brief history lesson, lets continue shall we?
Released in 1987, Whitesnake did three things for heavy metal,

1. Required every video(no matter what type of music) to have whats called a video girl
2. Invented the phrase ‘Power Ballad’
3. Made it okay to marry the chic you use in ALL your videos

‘Here I Go Again” was the second single of Whitesnake, first was ‘Still of the night’, but depending on who you speak with, some people don’t count that song. The song opened with slow, soothing keyboards (played via Vandenberg, HE’S HOTT!!! DID I MENTION HOW FREAKIN  SEXY HE IS). Coverdale’s vocals are soft and sensual as he tries to tell us how he’s just a normal guy who wants to be loved and not hurt. Campbell’s guitar work on this song is great. Its clean and smooth, yet has the rough texture to it also. The whole song in general is an ode to just going out on faith and a prayer to get the girl of one’s dreams.

‘Is This Love’ threw the band’s popularity and pop rock into a frenzy.  Again Coverdale sings the song of regret and hindsight. The vocals are deep and bluesy, a style that Mr Coverdale has made his own. The bass thumps behind his vocals feel the pain of the argument and the yearning for the touch of the woman he let get away from him. He sings the song with passion and conviction that in his heart, he’s gotta get his girl back before its too late. Everyone plays the role in this song, and they play it dammit good. Even the backing vocals are yearning for this woman to see and understand that they too, want her to come back.

‘Crying in The Rain’ was another power ballad song hit for the band. The vocals again, bluesy, dark and sensual. This English man had it GOIN ON!!!!! Coverdale was what my Aunt called(the Pantie Bandit Singer). Again, powerful solos and cords drove this song to the edge and made you taste and bleed Coverdale’s pain and yearning.Like the song says ‘A stray dog howls when he’s lonely in the night’. And that’s the truth. 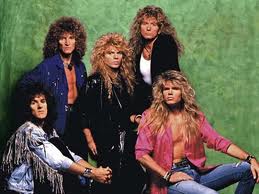 ‘Still of The Night’ is the song that started it all. When you hear that first cord, you can’t help but get into a frenzy because you already know whats going to happen. Coverdale starts the howl of his voice and all you feel all that pinned up sexual aggression coming to the surface and escape. Whitesnake makes the ugliest girl into a stripper queen and the nicest of school girl into a backstage queen(ha, shouts to my scorpions fans).

‘Gimme All Your Love’ is my number one motivator. Still to this day, aside from ‘Still’, it still gets me ready when I hit the town. I listened to that song EVERY MORNING to get ready for school, I can still hear my dad screaming to turn that ‘crap’ down as he bitched and complained about the morning traffic. Memories.  As I would tease, aqua net and blow dry my bangs that song was like roll call in first period homeroom. That was my motivational music. And twenty plus years later, I still blast it along with MANY MANY others.

This incarnation of Whitesnake would see huge success, build fan followings and even set out to conquer the  world and in some strange way succeed. Coverdale and the guys would achieve the success that they all had justly deserved. It would be brief, but still, justly deserved. The guys would open for the likes of Motley Crue and KISS before heading out on their own tour.

Like many of the albums I bought in 1987, the songs and the lyrics are reminders of what life was like then. Hassle free days of hanging out and trading posters of my favorite metal stars, covering my room with as many GnR, Scorpions, Crue, Whitesnake and Def Leppard posters as my allowance would let me buy.Weekend trips to the Aurora Mall, and looking at the guys. 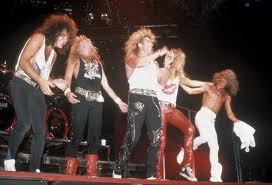 Daydreaming of moving to California and meeting my rock star husband and writing and directing.  Life was simple. No bills, no mortgages, no college tuition to worry about. I listen to my metal music everyday. Why you ask? To remember and to remind myself of my dreams that I once had, and to basically have that one moment of the day when I can just FORGET about what I got going on now in the real world, and just relive what once was(and ) yes, I STILL have a crush on Adrian Vandenberg.  Im sure when ’87 came, no one knew what treasures or what memories would be in store for the year…1987

2 thoughts on “In the still of the night…”