Well folks, for those of you just joining me for your first foray into my Monsters of Rock Cruise ramblings I’m The Meister and I’ve been fortunate enough to have voyaged aboard the Monsters of Rock Cruise yearly since its inception in 2012.  For the 2013 excursion I crafted a 20 volume series containing anything and everything to do with the cruise from personal stories to band bios and interviews with the final instalment being a guest on the on air podcast to recap my “Top 20 Moments” (just click the “play” arrow in the graphic at the top of the article to listen in).  This year I’m on the same trail for 2014’s now sold out Monsters of Rock Cruise: Escape to Monster Island and for this third volume I’ve been fortunate enough to secure a copy of the forthcoming Red Dragon Cartel album slated for release on January 28th, 2014.  Here’s a look and my thoughts of these shipboard performers. 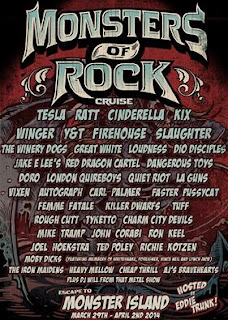 When this years line-up for The Monsters of Rock Cruise was revealed there were a few “unknowns” in the roster.  Had it not been for the name attached to the Red Dragon Cartel, I would have been in the dark on them and probably not checked them out until a little closer to cruise time.  The name attached was Jake E. Lee….ring a bell?  It should, Jake E. Lee is well known for his tenure in Ozzy Osbourne’s band and also his own post-Ozzy project, Badlands, featuring future KISS drummer Eric Singer, bassist Greg Chaisson and former Black Sabbath vocalist Ray Gillen.  Jake began his interest in guitar after being introduced to bands like Jimi Hendrix, Led Zeppelin and Black Sabbath by his older sister.  Around 1980 Jake E. Lee joined vocalist/guitarist Stephen Pearcy in a band called Mickey Ratt which would in time be shortened to Ratt.  Lee departed Ratt, making way for the classic line-up of that band and joined the Ronnie James Dio produced and Wendy Dio managed outfit of Rough Cutt.  From there Ronnie James Dio asked him to join his new project, Dio, but it was a short lived union.  Jake is in good company as Ratt, Rough Cutt (who have since had to cancel their appearance aboard ship), The Dio Disciples and surely Wendy Dio are all aboard ship for this year’s Monsters of Rock Cruise.  After a tough decision by Ozzy Osbourne between George Lynch and Jake E. Lee, Lee joined Ozzy in 1982 in time for the Bark At The Moon release and the follow up Ultimate Sin in 1986.  Lee was surprisingly fired by Sharon Osbourne in 1987.  Badlands was formed by Lee in 1988 and issued three albums Badlands (1989), Voodoo Highway (1991) and after several years and the loss of vocalist Ray Gillen to HIV, Dusk (1998).  Since then Lee has kept a relatively low profile releasing some solo work, A Fine Pink Mist (1996), Retraced (2005), Guitar Warrior (2007) and Running With The Devil (2008) as well as working with Enuff Z’Nuff on their 2009 effort Dissonance.  Jake surfaced again in 2011 in the video for the song “We Come Undone” by the band Beggars & Thieves alongside Ron Keel, Blas Elias, Paul Shortino and porn star Sunset Thomas.  He appears at approximately 2:30 minutes, playing the guitar solo under the following quotes or captions on the screen, “Jake E. Lee is alive and well, living in Las Vegas”.  “He would just rather play with Beggars & Thieves than deal with shady promoters and play “Bark At The Moon” 750 more times”.

Jake has emerged from his self imposed seclusion and returned to the musical forefront with a vengeance bringing with him a new band called Red Dragon Cartel.  The band features the talents of Ronnie Mancuso, the guitarist from Beggars & Thieves.  For Red Dragon Cartel Mancuso wields the bass guitar and serves as songwriter and producer for the Red Dragon Cartel album due out on January 28th, 2014.  It is Mancuso that we have to thank for co-ercing Lee back into the foreground of the musical limelight.  Rounding out the band are drummer Jonas Fairley and vocalist Darren James Smith.  Fairley and Smith were both selected by Lee from thousands of submissions through a “Jake E. Lee needs a lead singer and drummer” Facebook campaign.  Darren James Smith is a fellow Canadian and integral member of the music scene up here in the Great White North being a member of such awesome bands as Harem Scarem, Heaven’s Fire and Warmachine (Harem Scarem / Heavens Fire / Warmachine concert review).

On line reviews of the première Red Dragon Cartel show, particularly from The Metal Sludge website, have been less than kind, especially to Darren James Smith’s performance.  In true “in your face” fashion Darren and Red Dragon Cartel rebounded in spades with subsequent performances and have garnered mostly excellent reviews moving forward.  I have to wonder if the MSC Divina cruise ship is big enough for Darren and Stevie Rachelle (vocalist for Tuff and, if I understand correctly, the co-creator of Metal Sludge and possible author of some of Smith bashing articles found therein). 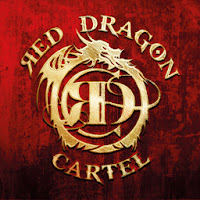 As for the album itself, you should probably pick this up sooner rather than later!  Jake has definitely returned to take the crown and the album features guest performances from the likes of Robin Zander (Cheap Trick), Rex Brown (Kill Devil Hill, Down, Pantera), Maria Brink (In This Moment), Todd Kearns and Brent Fitz (Slash’s Conspirators), Scott Reeder (Kyuss), Paul Di’Anno (Iron Maiden) and Sass Jordan.  Produced by Ronnie Mancuso, mixed and mastered by Kevin Churko (Five Finger Death Punch, In This Moment, Ozzy), the album can be pre-ordered through links included at the bottom of this article.

It starts off explosively with “Deceived” featuring what I found to be a fresh and inventive guitar riff that simply draws you in.  Jake E. Lee has returned and any rumours that you may or may not have heard o
f his demise are greatly exaggerated.  If you’re anything like me you’ll play this track several times before moving forward.  Can it get any better than this?  A little apprehensively I moved forward into the second cut of “Shout It Out” and I expelled a sigh of relief knowing that it was not a fluke at the start.  The third selection, “Feeder” has been issued as a video prior to the albums release and the track features the aforementioned Robin Zander of Cheap Trick handling the vocal duties for this one.

From there we get “Fall From The Sky” a slower almost Beatles-ish feeling selection before kicking into high gear once again with the Paul Di’Anno (Iron Maiden’s vocalist way back in the old days before Bruce Dickinson) led “Wasted”.  If we’re in high gear now what comes next can only be described as vaulting into overdrive with “Slave”, leaving me speechless….awesome is about all I can say!  The brooding plod of “Big Mouth” and especially the vocal chorus is less than a favourite of mine and no offence to guest vocalist Maria Brink of In This Moment, but it gets skipped in nearly every rotation of the Red Dragon Cartel disc.  “War Machine” however is a the exact opposite, boasting the longest run time on the album at over 6 minutes.  Make no mistake, the rest of the songs are no slouches, all but one over four minutes in length.  This Black Sabbath-esque sounding cut has Darren James Smith sounding a lot like Lee’s former boss, Ozzy Osbourne and may well be the stand-out track here if one must be chosen.  Canadian crooner Sass Jordan lends her soulful, throaty vocal stylings to “Redeem Me”, a great bluesy number.  The instrumental final track is a tender piano ballad titled “Exquisite Tenderness” and the lone track under the four minute mark.  You’ll hear Ozzy like riffs to Badlands style blues influenced guitar, everything else that you can think of and more with Jake E. Lee’s new project, Red Dragon Cartel.  Long live Jake E. Lee!

I can’t wait to catch Jake and Darren with Red Dragon Cartel on this year’s Monsters of Rock Cruise…..tune in again next week for another great upcoming release from someone who’s been performing on the cruise since it’s inception, someone who if it was not for I may never have discovered this amazing floating rock party.