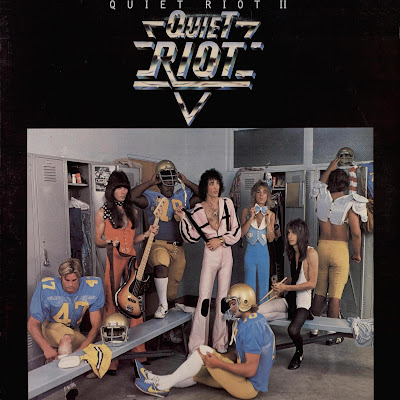 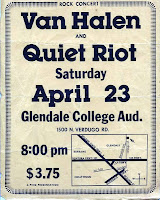 It’s almost like an urban legend at this point: Randy Rhoads was in Quiet Riot. They were huge on the Sunset Strip in the late seventies, going head to head with Van Halen, but they just couldn’t get a record deal. Well, it’s all true. The original incarnation of Quiet Riot featured Randy Rhoads alongside Kevin DuBrow, bassist Kelli Garni, and drummer Drew Forsyth. The band was managed by William Enter, a former musician himself who also managed Casablanca’s Kiss alter-ego Angel. There are a lot of similarities between Angel’s music and early Quiet Riot. Entner was close to getting Quiet Riot a record deal with Casablanca as well, the band even recorded their first album with the record label in mind, but ultimately the deal fell through. Entner did score the band a deal with CBS/Sony to release the already completed album, but for some reason the label chose to distribute the album only in Japan. The same fate befell the band’s second album when it was released only in Japan a year later. 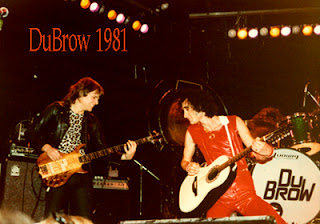 So technically Metal Health was Quiet Riot’s third album, but it came out five years after the first two albums and featured a completely different band and sound, the one constant being vocalist Kevin DuBrow. In fact the new band that DuBrow formed in Los Angeles in the early eighties after Quiet Riot Mk I disintegrated was initially called DuBrow, not Quiet Riot, but reverted back to the Quiet Riot moniker once Spencer Proffer and Pasha Records came calling. When Quiet Riot Mk II called their third album QRIII in 1986 they were essentially disowning those first two Japanese releases. I think in the eyes of pretty much everyone involved the original Quiet Riot was an entirely separate entity; same name, same singer, different band. 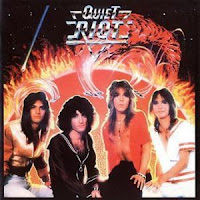 Quiet Riot with Randy Rhoads was essentially a glam rock band, the kind of band that was huge in the UK in the seventies, like Slade or Sweet, but not nearly as popular in the US (Sweet made a little more headway than Slade, Kiss are as close as the US came to having its own Slade). Quiet Riot could draw a crowd in California and apparently Japan, but that’s about it. There was nothing that out of the ordinary about the kind of music they were making. Even someone like Brian Johnson made very similar music with Geordie before joining AC/DC. Quiet Riot’s first album, which came out in Japan in 1977, sounds a lot like Geordie, take a listen:
Quiet Riot II, released in 1978, is a slicker, more professional sounding release, although the first album arguably contained a better batch of songs. The first song on Quiet Riot II, “Slick Black Cadillac,” would be resurrected five years later when it came time to make Metal Health.
“Slick Black Cadillac” is followed by a mellow pop tune called “You Drive Me Crazy.” They were clearly not using Randy Rhoads to his full potential, but I like the song a lot. Think about it, these are very impressive sounding songs considering it was 1978.
After covering the Small Faces’ classic “Afterglow,” which Great White would cover thirteen years later on Hooked, the band drop a generic glam rocker called “Eye For An Eye.”
Next up is one of my favorite songs on the record, “Trouble.” It’s a classic seventies rock tune alive with many elements of what would become pop metal in the eighties. Like much of the album the song is somehow both of its time and ahead of its time.
The next song, “Killer Girls,” is very generic, not terrible but boring. The song is followed by a fun glam rocker called “Face To Face.” Randy would later lift part of the song’s solo for “Flying High Again.”
“Face to Face” is followed by “Inside You,” which I guess is the ballad on the album. It’s not very good but is made up for by the last song album, “We’ve Got The Magic,” which is fantastic. I heard the song too many times several years ago when I was trying to digitize my friend’s copy of this very rare record and the song kept skipping towards the end, I played it over and over trying to get a skipless recording. I think I finally succeeded but it didn’t matter since within the next year or two the album was reissued on CD. I suppose I’d prefer it if Kevin didn’t pronounce it “mageek,” but it’s a very nice song.
There was definitely a third album in the works and some great songs have surfaced that the band was writing as they headed into the eighties. There was an unfortunate release put together by Kevin DuBrow in 1993 called The Randy Rhoads Years that featured overdubbed and touched-up versions of rare material that had been recorded with Randy. The music should have been left alone but luckily there have been bootleg records floating around for a long time that contain original, untampered with recordings of great songs like “Picking Up The Pieces,” which is definitely my favorite song by Quiet Riot with Randy Rhoads.
“Breaking Up Is A Heartache” is another very catchy tune from the band’s last days.
I believe Rudy Sarzo tells the story in his book this way: when it was suggested to Randy Rhoads that he audition for Ozzy Osbourne’s new band he said, “Who?” Whether Randy knew who Ozzy was or not, joining Ozzy’s post-Sabbath band didn’t seem like much of a step up from Quiet Riot at the time. It’s a wonder Randy took the gig. Ozzy’s last few years in Sabbath had not been very high profile and he was by all accounts a real mess, but obviously being in Blizzard of Ozz, which was the name of the band when Randy initially joined, offered Rhoads an opportunity to be much more of a creative force than in Quiet Riot. Listening to those first two Quiet Riot albums in hindsight, knowing what Rhoads was capable of thanks to Ozzy, it’s obvious that Randy’s skills were not being adequately utilized in Quiet Riot. With Ozzy it was a different story. Randy was free to soar. When the Blizzard of Ozz album took off the way it did I think everyone, except maybe Sharon, was shocked. It’s quite clear Ozzy owes much of his subsequent career, all that it entails, to the brilliance of Randy Rhoads. Ozzy himself no doubt agrees.
Randy recycled a lot of minor licks from his Quiet Riot days to spice up the Ozzy material, there is a great thread about this here:
https://www.nobitching.com/phpbb3/viewtopic.php?f=29&t=93&start=0 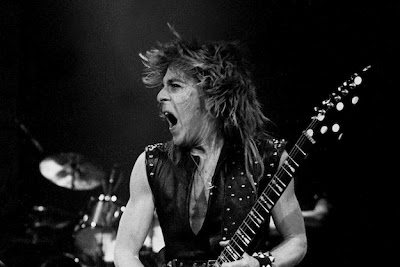