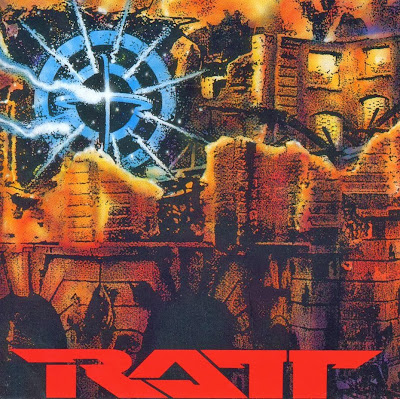 When I was a teenager RATT were one of my favorite bands, probably in the top five, and I still hold their music in high regard to this day. It is undeniable that Out of the Cellar is a fantastic album, in my opinion it is one of the best metal albums of the eighties, song for song it really holds up. I suspect many RATT fans will disagree but Invasion of Your Privacy was, to me, the classic sophomore slump. The songs just weren’t there. I quite like a few of them, “Never Use Love” is absolutely killer and “Got Me On The Line” is great, but the album as a whole was definitely disappointing coming on the heels of a work as impressive as Out of the Cellar.
I am a huge fan of the band’s next two albums; Dancing Undercover and Reach For The Sky are both excellent, a few of the songs might not be up to par but overall I really enjoy those records. The former was a big hit and the latter still made it into the top twenty and went Platinum. But what many rock fans seem to have missed is that there was another RATT album, after Reach For The Sky, and I’m here to tell you it is actually a damn fine record.
Detonator came out on August 21, 1990, the same day as Facelift by Alice In Chains, which is, in retrospect, quite significant. This is a full year before Pearl Jam’s Ten and Nirvana’s Nevermind, but there was already a tangible shift in the vibe of Headbanger’s Ball and on the pages of Metal Edge. Looking back, it was there. On the horizon. Faith No More had a huge hit with “Epic” that year and Cowboys From Hell came out in July. Cherry Pie came out in September and, as huge a hit as it was for Warrant, that song and that album really were the tipping point, the point at which glam metal hit the glass ceiling. For a short time “Unskinny Bop” was being played alongside “We Die Young” on Headbanger’s Ball, but the world, for better or worse, was just waiting around for Nevermind.
For some reason RATT had somewhat foolishly parted ways with Beau Hill, who had produced every album up to this point. Beau was recently featured on an episode of the Focus On Metal podcast and it seems that he might have been responsible for a great deal of what made RATT’s songs great. So without him what would they do, go it alone? Heck no. Enter Desmond Child, who has co-writing credit on 9 of the album’s 10 songs. Detonator was produced by Sir Arthur Payson, but I suspect Desmond’s contributions were more significant.
Detonator opens with a song called “Shame Shame Shame.” It’s not necessarily spectacular, but I like it. Next up is the first single, “Lovin’ You’s a Dirty Job.” This song for some reason reminds me of the first single from the previous album, “Way Cool Jr,” the difference being I like this song and did not like “Way Cool Jr.” I am not fond of the third song on the record, “Scratch That Itch,” but the next song, on which drummer Bobby Blotzer gets top billing as songwriter, blows me away. It’s called “One Step Away” and it is beyond catchy. Very poppy and I love it.
Side One of Detonator closes with a killer heavy tune called “Hard Time.” Thoroughly enjoyable.
Okay, we’ve arrived at Side Two and unfortunately the first two songs are not good, in fact they kinda suck, BUT the rest of Side Two? The last three songs on the album? AWESOME. AWESOME. AWESOME. First up we have “Can’t Wait On Love,” my favorite song on the record and one of my favorite RATT songs, career-wise. Absotively posilutely goddamn great.
That spectacular gem of a song is followed by…uh oh…THE BALLAD. Stephen Pearcy even…gulp…sings on this one. But guess what: AWESOME.
You know, to me, “Givin’ Yourself Away” is not just a “power ballad,” it is not a song to be snidely dismissed as some cynical stab at radio play. Sure, obviously the song was written with certain goals in mind but to me the song resonates more than the lifeless pandering some less talented bands embarked upon (Headed For a Heartbreak? Fly To The Angels?). “Givin’ Yourself Away” is well-written and delivered with at least a modicum of sincerity. It’s fair to say Stephen Pearcy has never struck me as the “romantic” type but I think he’s a reasonably talented guy and has always been honestly invested in his craft. He wants to write good songs. It is also significant to note that along with Pearcy and Desmond Child ubiquitous hitmaker Diane Warren is also credited. When Ms. Warren ventured into the realm of hard rock I was usually pleased with the results (name the artists: Bed of Nails, Turn On The Night, The Only Good Thing You Ever Said Was Goodbye, You Make Me Rock Hard) but the ballads were usually atrocities (When I See You Smile, I Don’t Want To Miss a Thing, Nothing Can Keep Me From You–holy mother of blech). Luckily she done good with “Givin’ Yourself Away.”
This brings us to the last song on the record, the only song not co-written by Desmond Child, “Top Secret,” and interestingly a song called “Top Secret” also featured in the band’s early live sets in the late seventies, when they were called Mickey Ratt, but the song as it appears on Detonator is overhauled in a major way, and it is far better in its 1990 incarnation. I love it.
After Detonator RATT came out with one more song, “Nobody Rides For Free,” which was featured on the Point Break soundtrack, but soon after that the band broke up, Pearcy forming Arcade and releasing a couple of underwhelming albums. “Nobody Rides For Free” was awesome though.