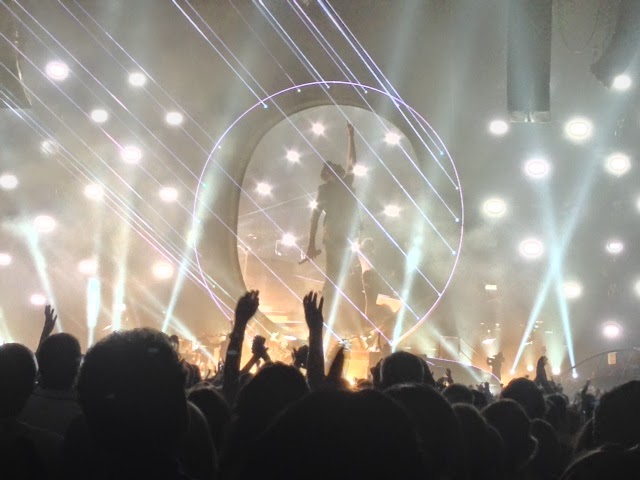 Recently I read a blurb on Facebook that said “I may be old but I got to see all of the coolest bands”. I laughed and it got me to thinking about all of the great shows I have seen over the years. I am seriously considering getting that quote on a T shirt.

I clearly remember back in my early twenties (around 1992 or so) looking back at my own personal concert list and feeling a little sad because there were 3 shows that I would probably never get to experience. Kiss with the original lineup, Van Halen with David Lee Roth and of course Queen as we had just lost Mr. Freddie Mercury.

As the years went by the Kiss reunion actually happened, Diamond Dave eventually graced the stage with Van Halen. Getting to cross these shows off my “bucket list” was incredible but without Freddie, I was unfortunately accepting the fact that I would never see Queen.

Freddie Mercury is absolutely irreplaceable. Nobody had a voice like his, nobody commanded a stage like him and in all honesty, nobody ever will.

Queen’s music lives on and Brian May is born to play guitar so when Queen teamed up with Bad Company’s Paul Rogers my eyebrows raised. I briefly became excited that just maybe I would get to see Queen live in concert.

Paul Rogers is an exceptional vocalist. Love hearing him belt out the Bad Company catalogue but when I heard him covering the cherished Queen tunes, it sounded to me like Bad Company doing Queen. As much as I wanted to love it, it just didn’t sound right to me.

Fast forward to American Idol 2009. I will unashamedly admit to watching my fair share of these silly music contest shows (idol, the Voice, etc) as I would rather listen to some music in the background rather than “Bachelorette’s” and “Kardashians” fighting on tv.

Anyways, watching Adam Lambert pull off Bohemian Rhapsody one night, I told my wife that Brian May should immediately sign him up. Lambert’s vocal range was incredible, he sounded enough like Freddie to make it work yet he could make it his own. He had a stage charisma that nobody could deny and let’s be honest, from a marketing standpoint he certainly could bring along a slew of young fans that could be introduced to the classic Queen catalogue.

When they recently announced a North American Tour for the summer of 2014, I have to admit I got a wee bit excited. It would never quite be Queen without Freddie but I felt if anyone could capture the spirit, Adam Lambert might just be the guy.

I pulled out the worn tattered bucket list, smiling as I remembered the amazing Kiss reunion shows and Diamond David Lee Roth reclaiming his rightful place in front of Van Halen. I hesitated to officially cross Queen off the list. What if I was all wrong about Lambert? I decided to wait until after the show to place the checkmark beside Queen. 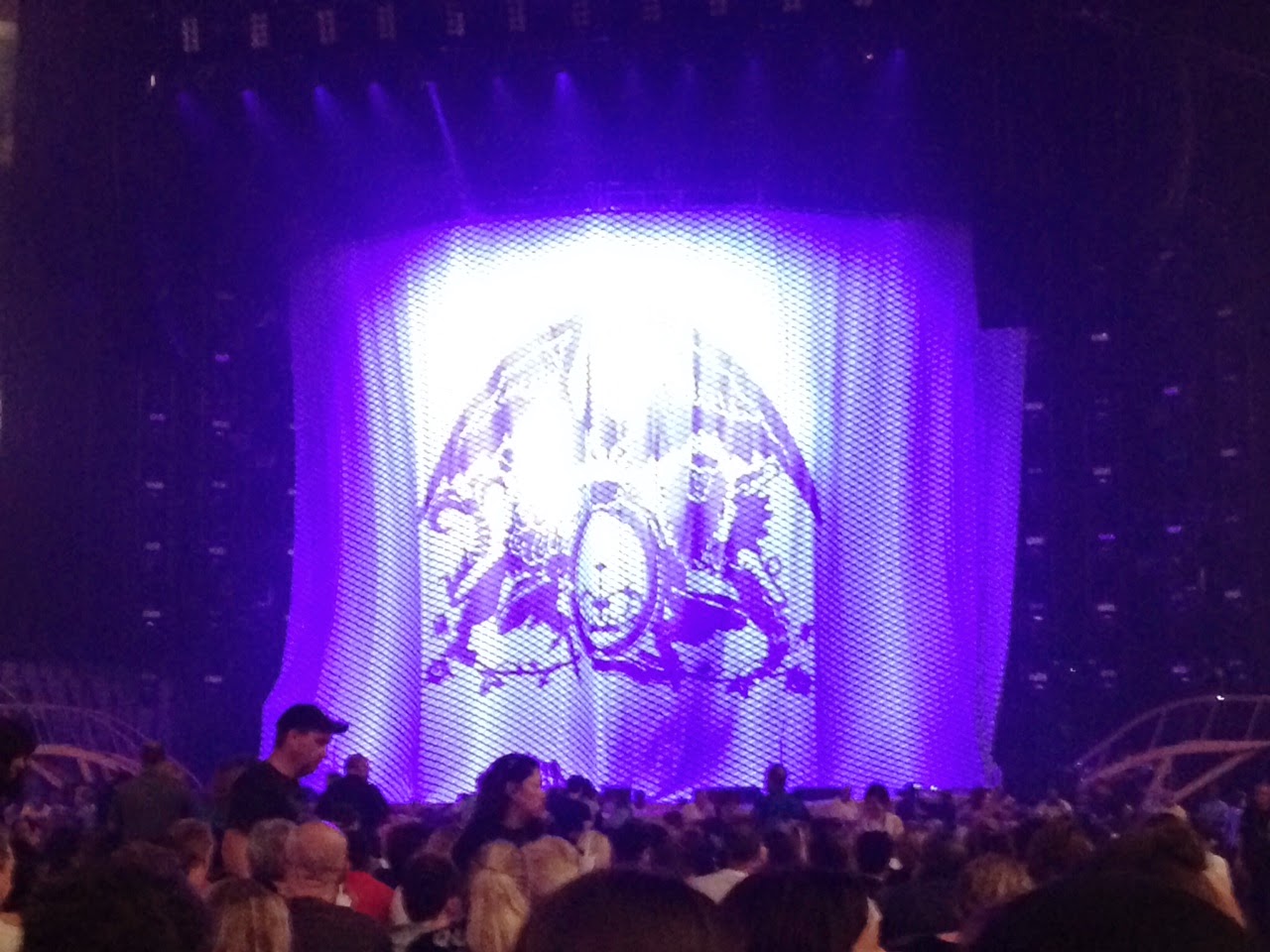 Electricity was in the air as 22000 plus awaited the curtain to fall. Twin video screens flanked the stage emblazoned with QUEEN with Adam Lambert. I scanned the crowd of all ages wondering how many of them had been introduced to Queen via the American Idol. I also wondered how the seasoned Queen faithful would accept Freddie’s “pop reality TV music contest winner” replacement this evening.

At exactly 8:20pm the house lights went out and the crowd went crazy as Queen launched into “Now I’m Here”. The curtain still hiding the stage as the video screens teased us with silhouettes. When the song really kicked in the curtain was actually sucked up into the lights and simply disappeared, it was a cool effect. The focus point of the stage was a huge circular video screen that was put to great use throughout the show.

A couple of years ago I penned an article entitled “3 Guitarists You Should See Before You Die”. It appears I need to go back and rewrite this to reflect 4! Brian May plays with such precision, feel and groove it is absolutely hypnotizing watching him maneuver the fretboard. I was in hard rock heaven.

It took all of about 45 seconds to realize that Adam Lambert was born for this gig. Decked out in a studded black leather suit and aviator shades, he embodied the look of a rock star but his vocals were truly jaw dropping. Say what you will about American Idol but this guy can deliver the goods. Totally capturing the sound of classic Queen and at the same time maintains his own style. I smiled and crossed Queen off my bucket list before the second song even started.

For the next two hours or so, it was a roller coaster ride of Queen hit after hit. Ripping into Stone Cold Crazy, Brian May and Roger Taylor played with the intensity of men half their age. Another One Bites The Dust followed by Fat Bottomed Girls and the place was rockin! Best of all the guys looked like they were having an absolute blast on stage.

Slowing things down for a moment with “In the Lap Of The Gods”  they came right back swinging with “The Seven Seas of Rye”.

“Killer Queen”, which had Lambert camping it up on a lavish throne fanning himself and sipping
Champagne from a bottle. “Somebody to Love” got the crowd singing in a call and answer reminiscent of Mercury and then into “I Want It All”. Nine songs in and they were just getting started. 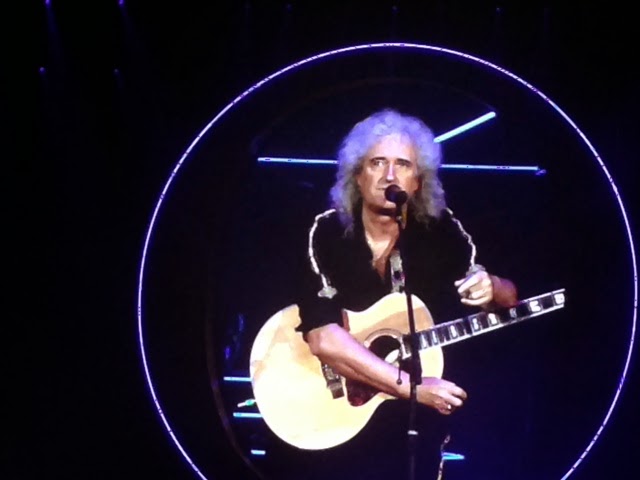 Brian May took to the stage with his 12 String acoustic. He asked us if we felt like singing? As he launched into the emotional “Love Of My Life” video images of Freddie rolled on the screens. It was an incredibly magic moment that elicited a fair share of tears and goosebumps from the crowd.

Brian took a moment to introduce the band before taking us on space ride for “39”, images from the Metropolis movie played as Brian was surrounded by the supporting cast of musicians. Spike Edney on keyboards and piano, Neil Fairclough on bass guitar and Rufus Taylor (Roger’s son) on percussion.

Up next Roger Taylor stepped out from behind the kit and stretched his vocal chords for “These are the days of your life” with his son holding down the drum duties. Adam Lambert rejoined the party to sing “Under Pressure” as a duet with Roger assuming David Bowie’s vocals. After which Brian May asked the crowd “what do you think of the new guy?” motioning to Lambert as they laughed. 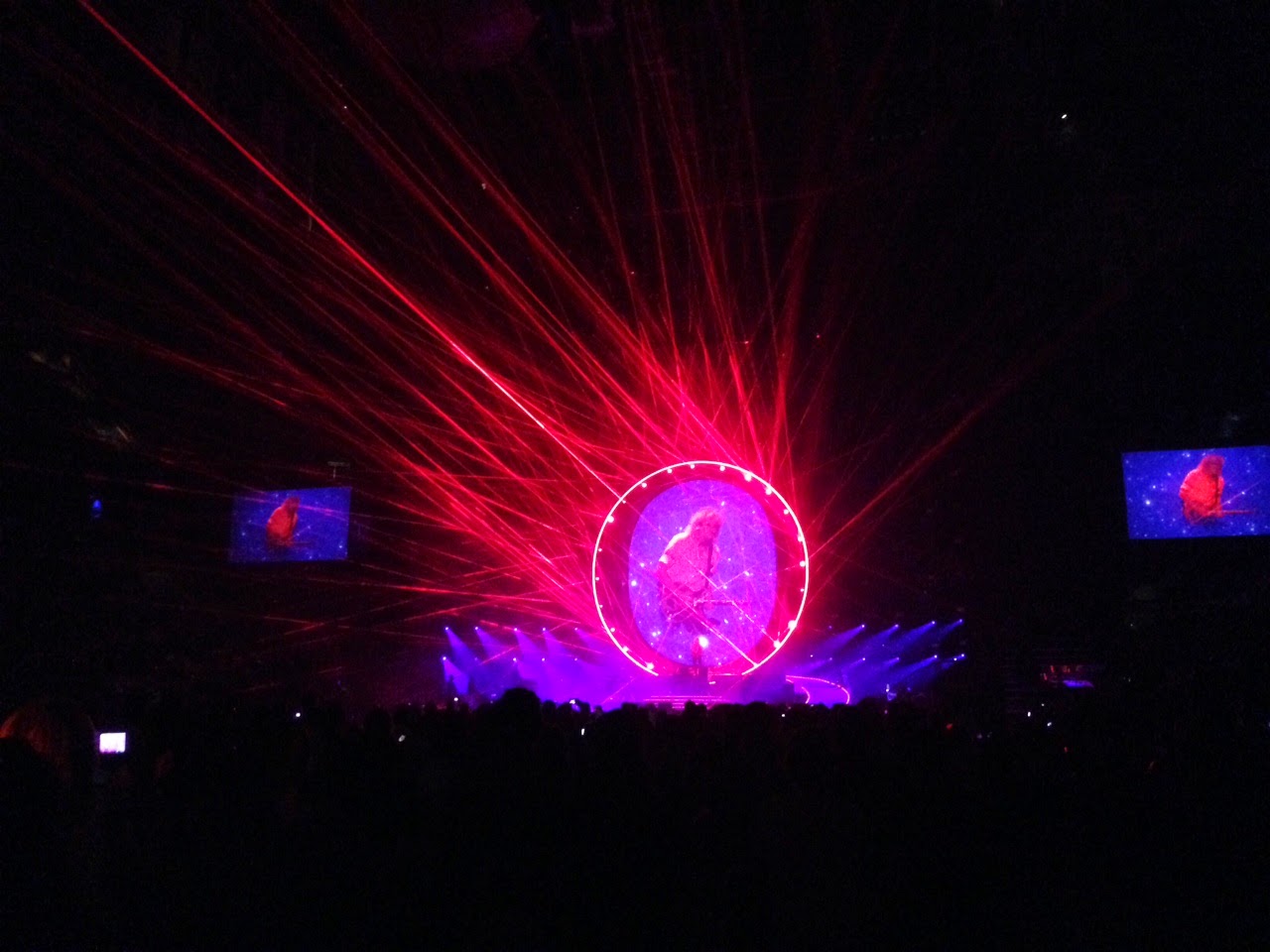 Freddie Mercury’s solo song “Love Kills” was followed by “Who Want’s To Live Forever” and then it was Brian May’s turn to bend some strings. Personally, I am not a big fan of solos. I would much rather hear a couple more songs than any musician noodle for ten minutes or so. That said, Brian’s solo was very melodic and tasteful and the video effects were solidly entertaining and c’mon it’s “Brian Freaking! May” and when the solo rolled into “Tie Your Mother Down”, I was right back into fist pumping rock n roll heaven.

Getting to clap along to “Radio Ga Ga” was a blast and then Lambert introduced “Crazy Little Thing Called Love” and suddenly Lambert was doing his best Freddie Mercury does Elvis Presley if that makes sense. 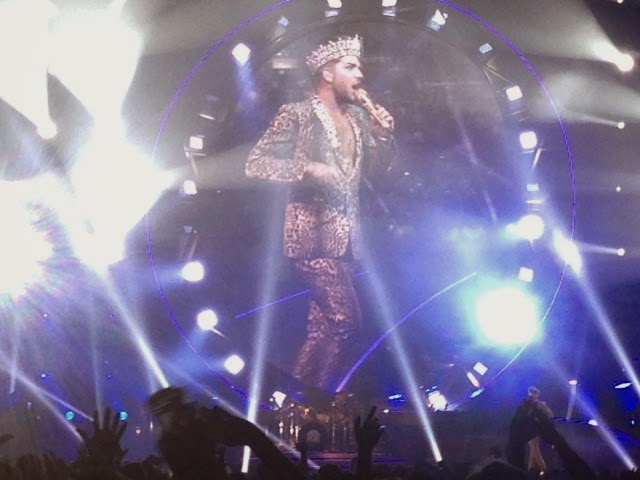 Now if there is a better rock song than Bohemian Rhapsody I am unaware of it. From the soft melodic piano to the lush harmonies that build throughout, the tasty guitar solo, the operatic middle section before exploding into a hard rock horns up anthem. It truly is perfection in a song and live? Unbelievable!! With the video screen jumping between live footage and the studio shot video of the song, the song ended with Lambert trading vocal lines with a video version of Freddie. Cue the goosebumps and as the gold confetti fell from the skies, the show came to a close and of course the crowd cheered for more.

Before too long the familiar thundering drums of “We Will Rock You” came thundering from the stage and audience was on their feet clapping along. Of course this was followed with “We Are The Champions” with Lambert sporting a gold crown of jewels. 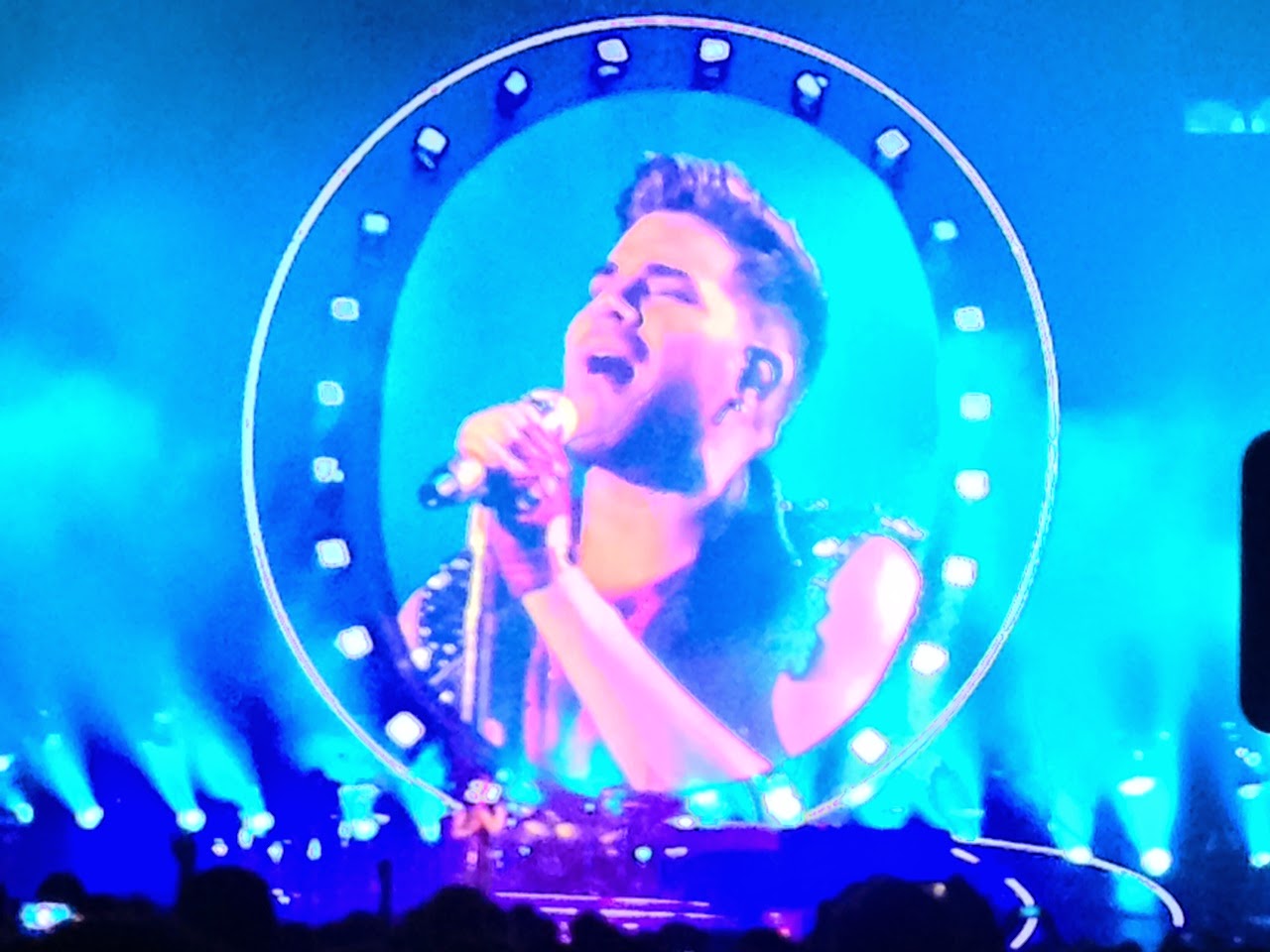 Two hours and twenty minutes of pure rock n roll magic. The only negative thing I can say about this show is that it wasn’t four hours and forty minutes long. Queen’s incredible discography just left too many songs on the table. I could easily fire off 22 more songs, hell probably double that before I got to the obscure stuff.

As for Adam Lambert? He’s the real deal, he isn’t Freddie but he fits the sound and he can sing like a mother trucker! Somewhere upstairs I think Freddie might just be nodding in agreement.

Rest in Piece Freddie Mercury and thanks for the music!