Ugly Kid Joe made their return to the stage on September 9th, 2021 in Virginia Beach, VA. Well, that’s somewhat true. The band called it quits back in 1997 then reformed in 2010. Since their reformation, Ugly Kid Joe, released a killer E.P. titled Stairway to Hell in 2012. They followed up that release with 2015’s, Uglier Than They Used Ta Be, which was their first full length album since 1996’s Motel California.

Between the bands return and the release of both the E.P. and album, Ugly Kid Joe, toured the globe multiple times. Most of the globe anyways. For whatever the reason, Ugly Kid Joe seemed to avoid the U.S. like the plague. Now that I read that back out loud, it’s kind of hilarious. The band that named themselves Ugly Kid Joe as a spoof on 80’s glam metal band Pretty Boy Floyd and titled their albums as spoofs on other famous releases, avoided playing in the States for years like the plague…only to make their return in the middle of a pandemic. Makes total sense to me.

No one really knows why UKJ stayed away from playing the U.S. for 25 years. As far as I know, all the members live in here. Except maybe vocalist, Whitfield Crane. It seems Whitfield is somewhat of a gypsy, living out of a backpack and traveling the world nonstop. As he stated at the show, he had been living in Central America for 10 months when the band received an offer to open for Judas Priest for one show on Priest’s  50 Years of Metal tour.

I have been a fan since my freshman year of high school back in ’91 but never had the chance to see them live. Fast forward to late July/early August, Ugly Kid Joe were announced as the opener on the Virginia Beach date of the Priest tour. I think it took me about all of maybe 5 minutes to buy a ticket and book a flight.

I got into Virginia early in the afternoon, grabbed a rental car and made way the venue so I could get my photo pass and check the place out. Somewhere between 6 and 7pm, I started to hear the band sound checking so I tried to make my way into the amphitheater but the security guys were not having it. The band ripped into sound checking Neighbor which sounded so damn cool…(pun obviously intended).

Ugly Kid Joe’s current lineup which consists of vocalist Whitfield Crane, guitarists Klause Eichstadt and Dave Fortman, bassist Cordell Crockett and drummer Zac Morris took the stage at 7:30. The setlist was made up of an outstanding selection of tracks from As Ugly As They Wanna Be (1991), America’s Least Wanted (1992), Menace to Sobriety (1995) and the Stairway to Hell E.P.(2016)…

This set was great. I would have loved to have seen them perform some tracks from Motel California (1996) and Uglier They Used Ta Be (2015) but for the amount of time they were working with, this setlist was a crusher.

Given the fact that the whole world has all been in various forms of lockdown for the last 18 or so months, the guys all living in different parts of the country and Whitfield living who knows where, I’m not sure how much time the band had to get together and rehearse for this show but they were super tight. The band itself was on fire and Whitfield’s vocal’s were fantastic. At one point, in the middle of “Funky Fresh Country Club”, the band broke into an extended jam session with the dynamic guitar duo of Klaus and Dave trading guitar licks back and forth which was pretty rad. Cordell and Zac are a great rhythm section and were way deep in the pocket for the whole show. I have said for a long time that this band was/is super underrated and after finally seeing them live, I stand by that statement 1000%.

From the time I got to the venue and up until the show started, more than a few times I would be in earshot of random people who seemed like they were not too sure about UKJ being the opener. I would hear “who??”, “they’re still around?”, “oh yeah, that band that had that Hate Everything About You song”…that all changed when Ugly Kid Joe took the stage and kicked into what was the Intro jam from the Menace To Sobriety album and Whitfield started with his crowd work. After having limited concert experiences over the last 18 months it was pretty insane to see a small sea of people, all with their hands in the air swaying side to side nonstop at the command of the UKJ front man who proved to be somewhat of a rock n’ roll circus master.

The band closed out the set with “Everything About You”. The one song that I both love and have been super burnt out on since the early 90’s. Seeing it performed live and with a full amphitheater of people singing long to it completely erased my burn out factor with it.

If you are reading this somewhere over in the United Kingdom or Finland, Ugly Kid Joe are headed your way in the near future. Visit this link for dates and to buy tickets. As for the U.S.,  I am not really sure when you’ll be able to see these guys live. As they said at the show, this was a one off. They are not on tour. But if the chance presents itself, get out and see Ugly Kid Joe. I have to imagine that in the times we’re all living through and with it getting harder and harder to go in and out of the country, I think the time could be right for the guys to consider a U.S. run at some point. Fingers crossed. 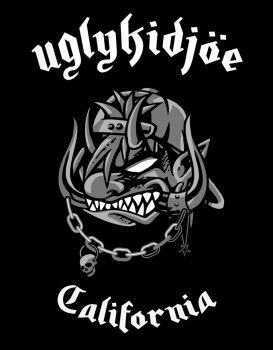