Unbroken: An Interview With Rene Thomsen 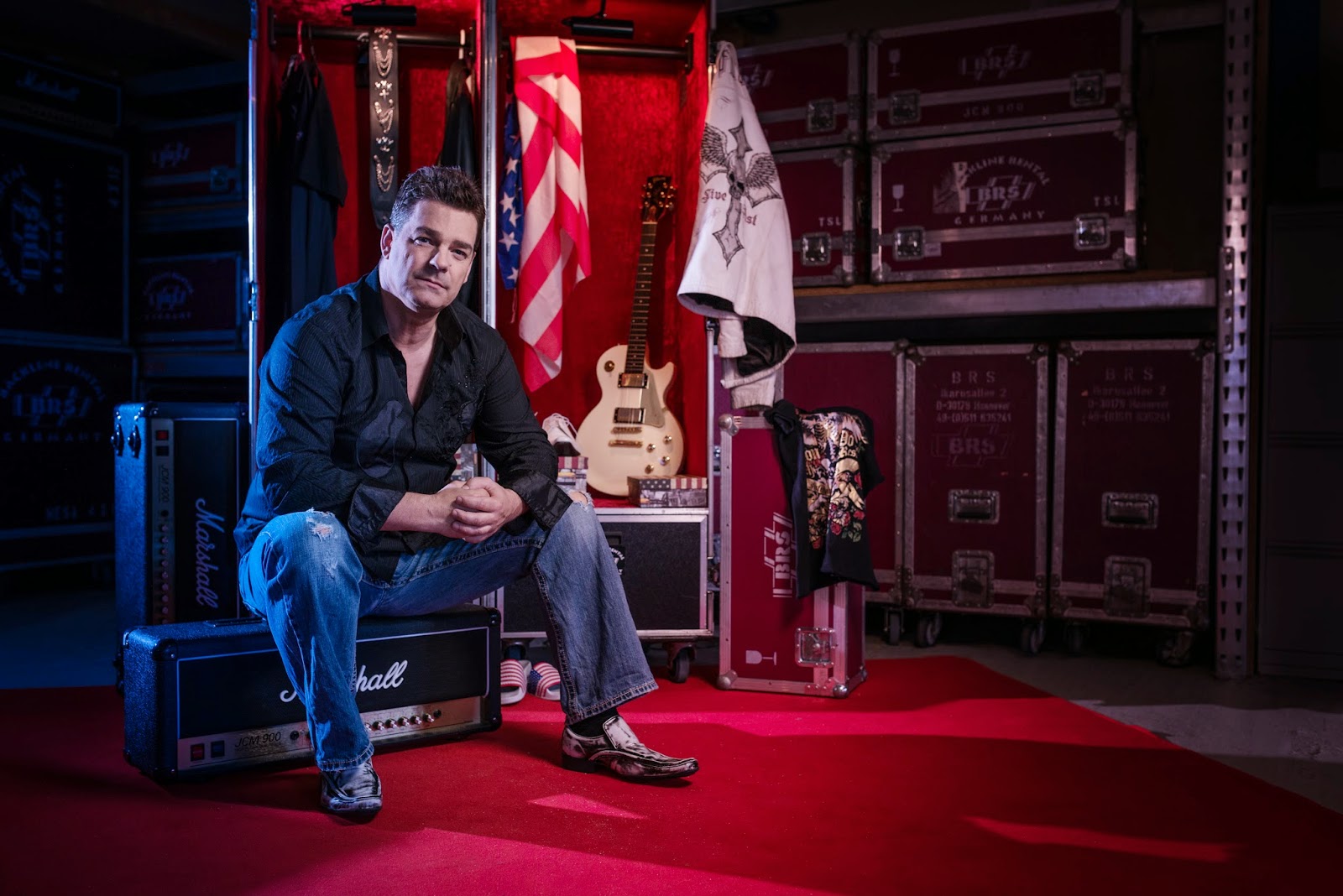 Several months ago I discovered the band Thomsen through their October 2014 released Unbroken CD. Not being familiar with them before I was pleasantly surprised upon spinning the CD when the lead track, “Draw The Curtain”, drew me in right away with its meaty power metal ingredients. You can read my full album review here: A Power Metal Delight: A Review Of Thomsen’s Unbroken. Fast forward to February 2015, when the opportunity arose for me to have a brief Skype chat with Rene Thomsen himself, I jumped at the chance to talk with this multi-talented musician. 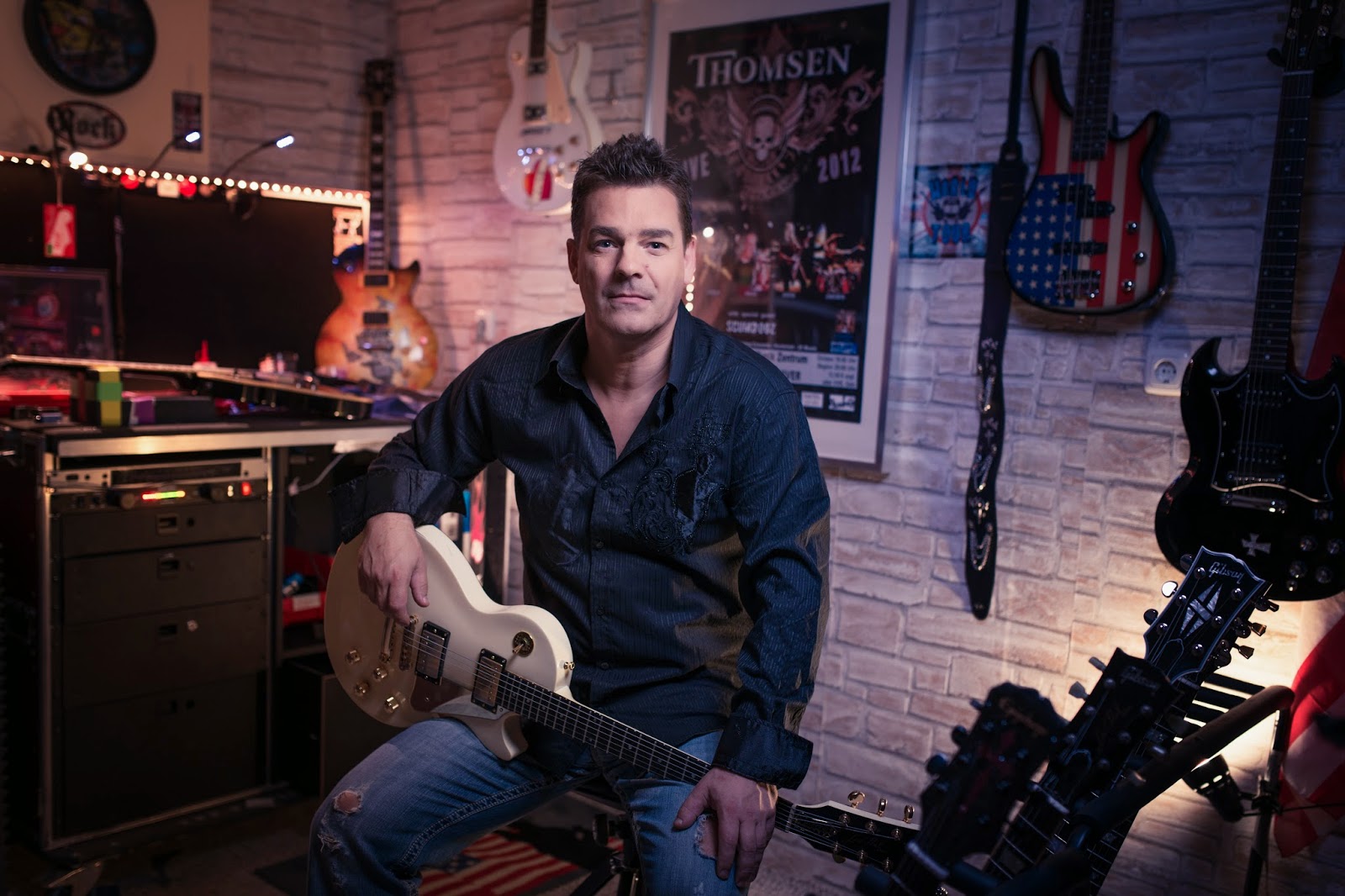 Seated at the helm of the good ship Meister (also known as my computer desk) I made the Skype call and after we rectified and disposed of a minor technical difficulty we were off.  The minute we said hello to each other Rene was excited to let me know right away that just before we started our Skype chat he had released a new video for “Break That Spell”. Literally posted live just before I placed the call, “Break That Spell” is the fourth track on the Unbroken album and the third to receive the video treatment. I could tell through his voice even though I’d never spoken to the fabulously talented German musician previously that he was on the edge of his seat and brimming with excitement about the new video. “It’s been released just since three minutes ago” he exclaimed. “New guitars, new bass, new drums, new vocals. It’s out of the rehearsal room with the current line-up.”  Rene went on to say that it was shot one day in November when drummer Andre Hilgers (Rage/Silent Force) had the time to meet with them. Rene, who recorded and mixed the song himself, says “It’s much more aggressive than on the CD” and “for a video directly out of the rehearsal room it’s OK, but it has HiFi sound so you can listen to it no problem”. I disagree Mr. Thomsen! I watched the video after our little talk and I’d say it’s more than just OK! The video for “Break That Spell” appears below so you take a look and a listen and judge for yourselves.

The compositions of Unbroken have been crafted musically by Thomsen himself with the lyric portions being supplied by writing partner Helge Engelke. “I can’t write lyrics,” Thomsen laughs “even though I did for the first album.” For the lyrics of the album’s title track, “Unbroken”, Helge Engelke took inspiration from the trials and tribulations that Rene Thomsen went through in making this album, Thomsen says. 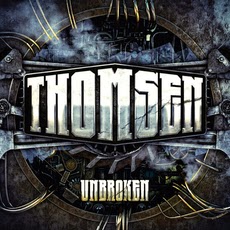 Rene has assembled a band of hard working and talented musicians for the live show that include himself as the guitarist, Andre Hilgers behind the drum kit, bassist Ingo Luhring, guitarist Michael Pesin and Russian vocalist Denis Brosowski (pronounced Dennis even though there’s only one “n” and Brozoffski). In fact, Rene says: “When Denis was cast as the singer for Thomsen during his auditions at The Hannover Musikzentrum in his very first appearance with the band I decided to record it right away”. That recording, “Tears Of The Sun”, serves as the last song featured on the 2014 Thomsen Unbroken album. The accented, but well-spoken German guitarist also had nothing but good words to say about the musicians that went into the making of the Unbroken album. He spoke very highly of each of the drummers that contributed, Andres Hilgers, Bobby Jarzombek (Halford/Riot/Sebastian Bach) and Vinny Appice (Dio/Black Sabbath/Heaven & Hell) and the different styles that each one brought to the recording. Also held in high regard were other guest musicians including guitarist Mathias Dieth (Sinner/U.D.O.) and guest vocalist the German legend himself, Udo Dirkschneider (U.D.O./Accept)! Udo‘s gravelly vocals appear on the track “We Made It” which Rene wrote musically about the late great Ronnie James Dio the night after the legend’s death. 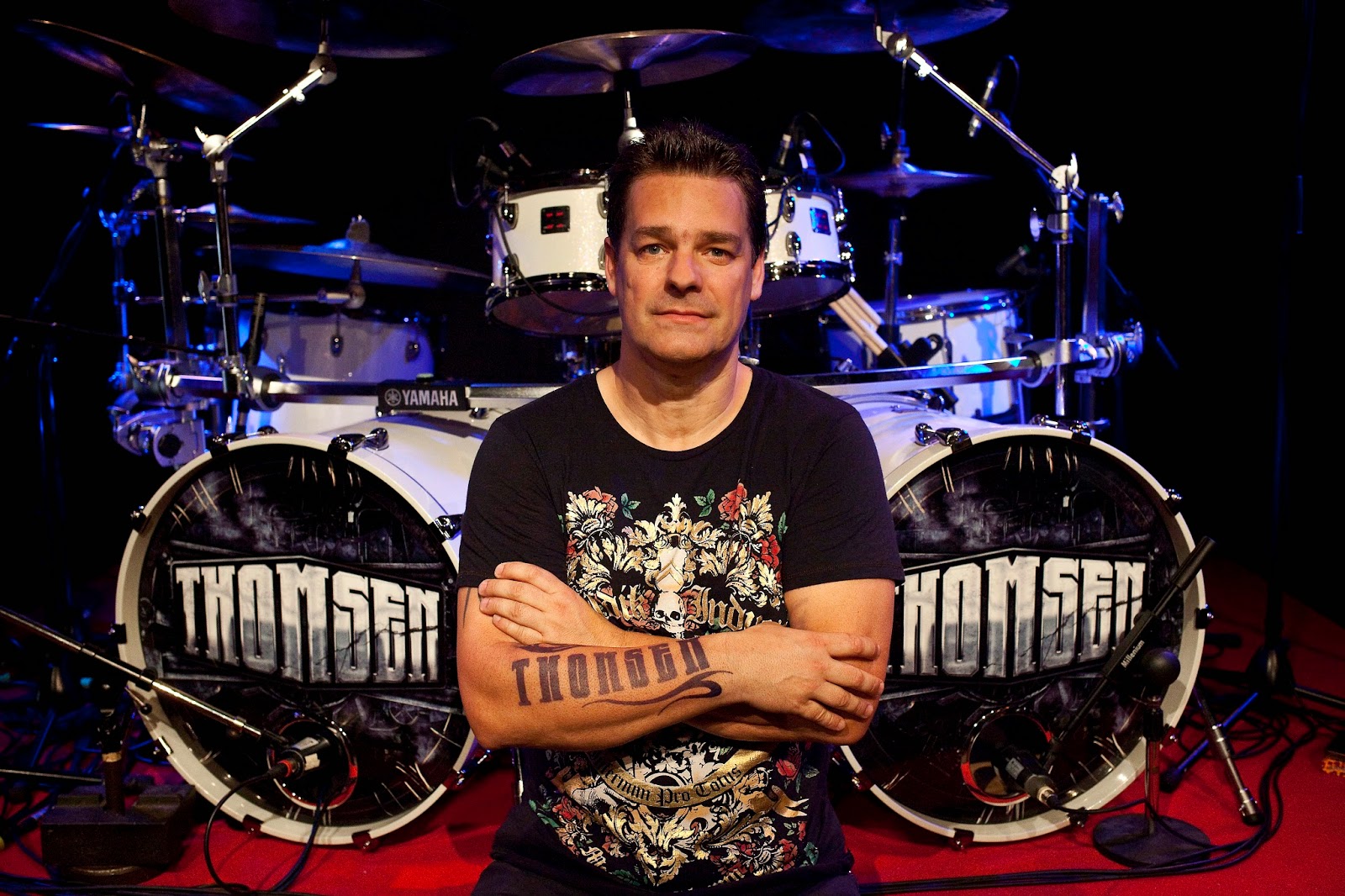 Throughout our conversation, Rene Thomsen is extremely good humored, laughing and joking during the whole chat. At one stage, he was quite comical when discussing his temporary fake tattoos, “I need to make money with customers, so I can’t have my name on my lower arm. People will go: What’s wrong with this guy?” After explaining where he has them made he continued with (voicing both himself and the imagined person he’s talking to), “You make it two or three days before you want to show it and then people go: Oh Rene is it a fresh tattoo? And then: Why do you put your own name on your arm, what’s wrong with you? Well, it’s my band name, I’m a rocker! Umm hmm OK….wanna have a beer?” He laughs as we agree that not everyone understands being a rocker. “My parents go like: Rene? Ya? What have you done to your arm? Well, I put my name on it in case I get old like you people. And if they’re in a good mood they laugh and if not they hang up.” he jokes. A complete pleasure to talk with and a professional dedicated to his craft. 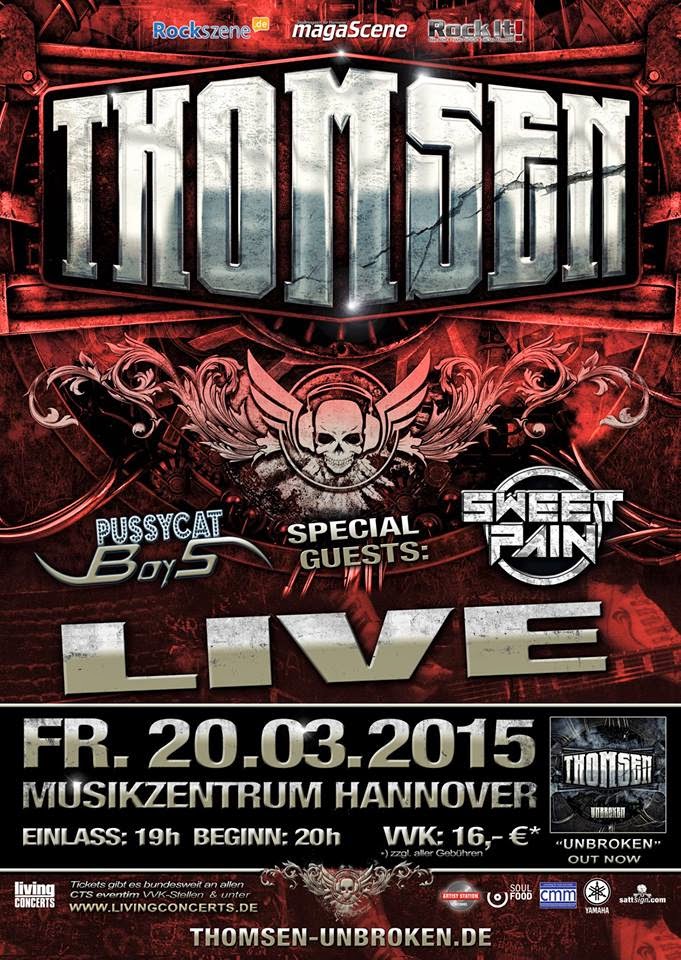 Rene himself is a hard worker, a perfectionist, wanting to deliver the best that he can to his fans as evidenced by phrases he said such as “technically the album was done correctly, but it wasn’t metal enough for me, so it’s been mixed twice.” Rene also spoke of how hard it was for a small band like his to get found or discovered, “It’s a local thing here”. Determined to give only a “safe, clear” performance, it’s hard for Rene and his band to play gigs unless they are nearby his hometown of Hannover, Germany, with the expenses of travel, gear and the personnel required to give the best show that he can to the audience. “I don’t want to gain any money playing live,” he says, “but I need to cover my costs.” There will be some shows in promotion for the album, “March 20th we make a kick off for live here in Hannover and it’s good sold already. People remember my last show because I bring extra lights. I bring extra staging so I make the stage deeper so we can set up the full nine yards.” This is good news for The Meister as I hope to catch a live Thomsen event during my three week Europe vacation in June 2015.

We also spent a moment on the evils and positives of the age of the internet. “I-Tunes is cool for me ’cause I have all the rights on digital and it worked well. The I-Tunes sales are great, and the people buy the full album,” he informed me. And with those high I-Tunes sales I was surprised when he let me know that people are buying the full album, something that I didn’t think was taking place in today’s marketplace.

As a former guitar tech Rene Thomsen has “been handed through from one major guitar player to the next one”. Working as a guitar tech for Mathias Dieth, the former guitarist for U.D.O., Rene has been on tour with bands such as Ozzy Osbourne, U.D.O., Helloween, and Guns ‘n’ Roses. “Mathias and I we got to know Zakk Wylde and then I did the sound checks for U.D.O. and Ozzy when he wasn’t there. I played every afternoon on tour and then I did the sound checks for the guitar players, I always learned one song to be able to do a guitar song that was of the band so that if they had a promo or an in-store I was prepared well if they weren’t there.” Rene 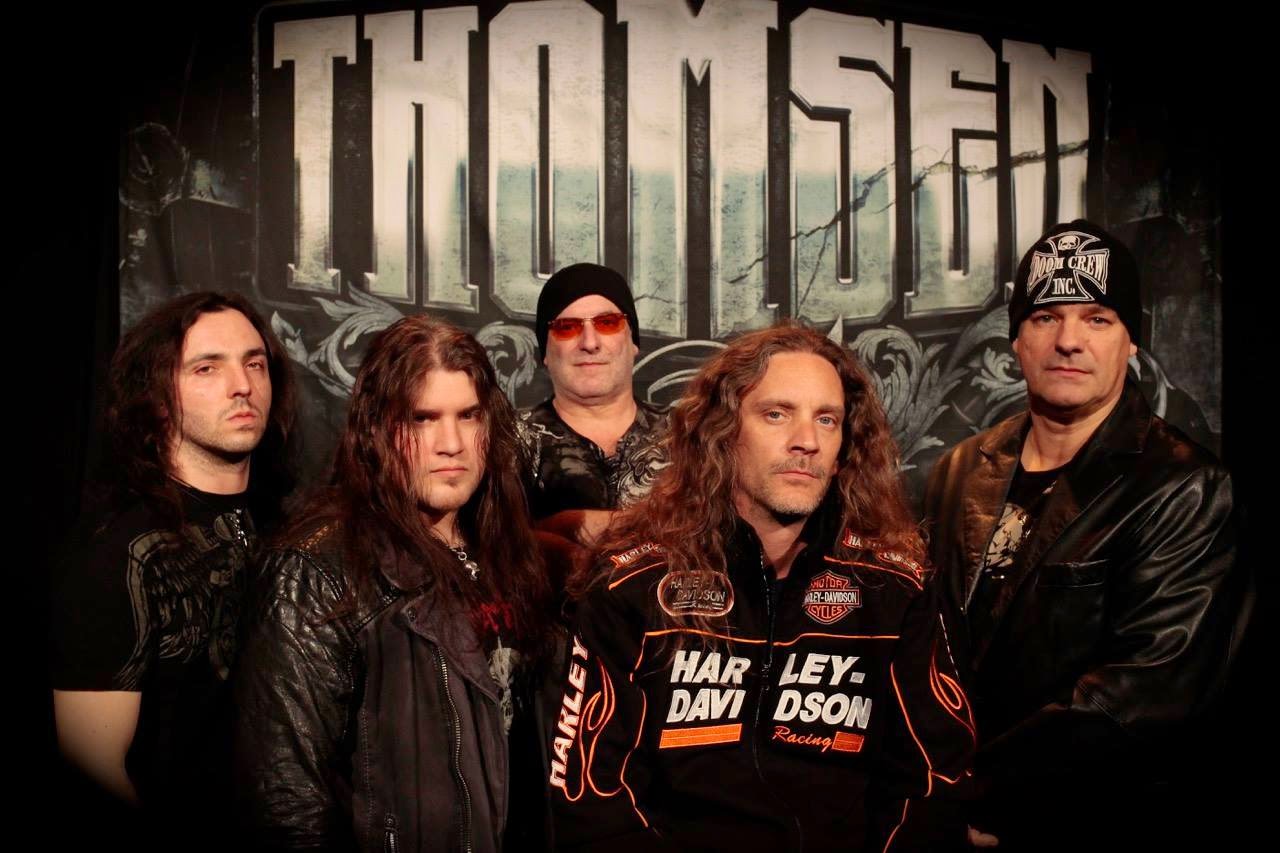 admits that “Zakk Wylde is my absolute guitar hero” and you can tell that he’s beaming as the words roll off his tongue. Rene had the opportunity to meet and learn from Maestro Wylde during that tour. “Zakk, I only have one question: Ya, what is it? What’s the correct official riff, how do you play it for “I Don’t Know”? And he teach me. It needed a week ’cause it’s not so easy as people say. I have very small fingers and then I have my fingers on the fretboard and he say: no, no, no Rene, a bit more, a bit more and then he took my fingers and spread them over the fretboard and I say ahh, ahh. Yeah well, you have longer fingers you have no ahh, so now you have ahh. So this was very, very funny. A very fine guy, it was very nice getting to know him these days and we had a good time.”

A third record is planned with a mixture of live recordings, re-recordings with Denis on vocals and two or three new songs. Rene hopes that it may even be featuring Zakk Wylde as a guest guitarist! “Zakk Wylde is the next musician I do my record with. He can only say no! I ask him and I try to convince him. I’m a riff player same as he is, so maybe I have something he likes.” I’m hopeful for ya Rene!

When asked if there’s anything else he wanted to mention he paused for a fair length and responded amidst a raucous bout of laughter with “Buy my fuckin’ record!”, a sentiment that The Meister agrees with all the way. Support the artists and keep the music coming. I highly recommend Thomsen‘s Unbroken for metal fans across the world!

Both Rene Thomsen and Decibel Geek would like to extend special thanks to Dustin Hardman of Hardman Press Promotions or the opportunity for this interview.