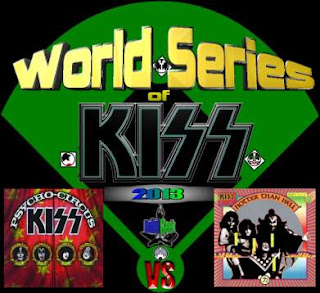 BJ: Kiss’ 1996/1997 reunion tour was an absolute triumph and the idea that the original four were going to make a new record together had me very excited, but September 22, 1998 was a very sad day. Turns out the original four did not make a record together. I don’t blame Ace and Peter for what happened, I blame Gene and Paul and their power trip. I wouldn’t know until later that Gene and Paul made at least ten times what Ace and Peter made on the reunion tour, probably more. That’s bullshit, in my opinion. I paid to see all four guys, period. I bought Psycho Circus to hear all four guys. No effort was made on Psycho Circus to rekindle the fire of the original group. I like the title track but it sounds a lot more like Animalize than Rock and Roll Over. Gene’s songs on the album come across as weak attempts to sound relevant in 1998. I hate Within and the lyrics are really dumb. We Are One isn’t terrible, just frivolous. I like Journey of 1000 Years but it sure doesn’t sound like Kiss, except maybe The Elder, not a bad thing but not what any fan buying the record expected. I am sure Ace’s song Shakin’ Sharp Shooter was better before Gene meddled with it. I pledge Allegiance is dumb, You Wanted The Best is horrible, Raise Your Glasses is okay but belongs on Crazy Nights, Dreamin’ is a snooze, and the obligatory ballad is an insult. I hate the album Psycho Circus, it makes me mad. Kiss’ second album Hotter Than Hell is plagued by production issues but the songs are great. My favorite is Mainline, written by Paul and sung by Peter, I really love that song. There isn’t a bad song on the record, although I’ve never been crazy about Watchin’ You. This isn’t only a vote for Hotter Than Hell, I am happy to be able to vote against Psycho Circus. Winner: Hotter Than Hell

AAron: Paul, Gene, Ace and Peter from 1974 Vs. Paul, Gene, Ace and Peter from 1998 in Rock N’ Roll Time Machine Warfare! If you can overlook the fact that Pete and Ace didn’t play a whole helluva lot on Psycho Circus. That album should have, and could have been so much more, if they had approached it with the same raw determination and team work mentality as they did for Hotter Than Hell. Could Psycho Circus have been as good as Hotter? Maybe. Is it? No way in Hell. Winner: Hotter Than Hell

Rich: Psycho Circus is one of the KISS records that hasn’t had much spin around the Meister’s household and I didn’t even come to own a copy until several years after it’s release, strange because I’m usually in line the first day.  I’d heard some of the tracks on the Psycho Circus/Reunion Tour and was not offended by them, probably overshadowed with the excitement that the boys were back together.  And I still even have the Psycho Circus tour book and 3-D glasses that came with the admission to the show, one of the best ever KISS shows if I recall, well is there ever really a bad one?  The show could have meant more to me because I attended it with a friend of mine who had medical issues all his life and has tragically passed away now.  Hotter Than Hell is cool with the Japanese characters on the cover and also contains one of my all-time favourite KISS songs in Parasite which still sounds as fresh to me today as when I first heard it on The Originals three record package that I had unearthed as a secret treasure and acquired for fifty cents at a Saturday morning garage sale.

If we look at it in terms of a 10 goal hockey game (I am Canadian after all…lol) The Meister predicts the scoring outcome would be Psycho Circus  4 – Hotter Than Hell 6. Winner: Hotter Than Hell
Chris: This one is very easy for me as it’s a contrived package of missed opportunity with great production compared to timeless, amazing songs with horrible production. Ultimately, it’s about the songs.
Psycho Circus goes down as one of the biggest disappointments of my KISS fandom. Coming off the reunion tour high, I was stoked to finally hear a new album of material from the original four. So much hype was coming out of the KISS p.r. machine during the making of this album, talking about the cohesiveness of the band and how the material sounded like 1976 all over again. What we got were session players, cornball lyrics (even by KISS standards), and a ridiculously bad sequel to ‘Beth.’ This may be my least favorite KISS album of them all. The only real highlights for me are ‘Journey of 1000 Years,’ and some of Tommy Thayer’s solos. Big-time missed opportunity to give the fans what they wanted.
Hotter than Hell sounds like it was recorded in a cement mixer. The guitars are muddy and overdriven to the point of pure saturation. The drums sound damp and limp and the vocals have way too much echo is spots. All that said, there are songs on here that are some of the band’s best. Parasite, Comin’ Home, Strange Ways, Got to Choose, and Let Me Go Rock and Roll are worth the record price alone. Easy pick here. Winner: Hotter Than Hell

Wally: When Kiss reunited I was like a 10 year old kid at Christmastime! It was my dream come true to see the original band and I was lucky enough to catch two shows on the reunion tour. When I heard they were heading into the studio for Psycho Circus, I was stoked. This had the potential to be so epic and special and i couldn’t wait to hear the result.

When it came out I tried so hard to love it. I defended it because this was KISS and I always will but hell Paul and Gene, this album certainly tested my Kiss fan loyalty. It has a couple of decent songs but for an album we waited so long for with the original lineup, it quite frankly sucked. It made me love Carnival of Souls and the non makeup lineup even more.
Hotter than Hell, much like the debut album was raw, edgy and contained some amazing songs that were buried in horrible production. I will put up with that production any day of the week to hear “Parasite” or “Let Me Go Rock n Roll” any day of the week. Hotter than Hell easily wins this match up for me. Winner: Hotter Than Hell
Round 1 Game 5 sees Hotter than Hell victorious with a shutout. Score 5 – 0