Starz Lit Up Louisville In '78 For Live Record

“When we find a hot town that’s full of hot people, we know that makes a hot crowd. And a hot crowd makes a hot live album so we’re doin’ one here tonight!” – Michael Lee Smith

And they did just that. They made ‘Live In Louisville’. Only to have it released years later. A mystery to me. It seems the stage was set. March 1978. Legend had it they played 2 nights at the venue known then as Municipal Auditorium, a popular concert stop during the 60’s and 70’s that sits a mere 2 right hand turns off the Interstate 65 corridor. It played host to many bands in those days including The Rolling Stones and KISS. The first night was for rehearsal, the second night was recorded and also broadcast live over WLRS, the local rock station. Tickets were sold for $1.02, a play on the radio station’s frequency numbers:102.3. 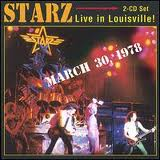 Starz were touring in support of their self-produced third album ‘Attention Shoppers!’ released in January of that year. This would be the last studio album to feature the original lineup of Michael Lee Smith on vocals, Richie Ranno and Brendan Harkin on guitars, Pete Sweval on bass, and Joe X. Dube on drums. The setlist was slightly over 1/3 from ‘Attention Shoppers’ and equal parts from their self titled ’76 debut and ‘Violation’ released in 1977.
The band opened the set with ‘She’ off of the then current album and worked back chronologically with ‘Rock Six Times’ and ‘Subway Terror’. The next dozen plus songs are a joyride of fun power pop metal that critics in those days simply found too low brow and thus treated the band as such. Many highlights for me in this set include ‘Cool One’, a rockin’ boogie that sings the praise of a girl and some uninhibited fun at a movie theater. The slightly punk ‘X-Ray Specs’ is one many tracks that showcase the seamless guitar duo of Ranno and Harkin. Bassist Pete Sweval adds a very cool “fuzzbox” type effect to many songs. ‘Anyway That You Want It’ is a sweet, melodic mid tempo pop song that leads right into the bands sole Top 40 hit ‘Cherry Baby’. 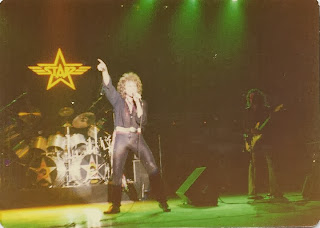 Photo courtesy of Susan Mayhugh. Used by permission.
An absolute pinnacle on the recording is ‘Waitin’ On You’. A classic 70’s riff driven extended jam that showcases the Richie Ranno/Brendan Harkin guitar team as well as the tight rhythm section of Pete Sweval and Joe X. Dube. Midway through the track they go into ‘Worlds Greatest Guitar Riffs’ which could be best described as a micro-medley of Mountain’s ‘Missippi Queen’, ‘Satisfaction’ by The Rolling Stones, The Kinks ‘You Really Got Me’, and ‘Oh, Pretty Woman’ from Roy Orbison. From there they go into quick guitar jam of ‘Coliseum Rock’ (forthcoming album), then back into ‘Waitin’ On You’.

Encore numbers include a lamenting blues number ‘Pull The Plug’ inspired by actual euthanasia cases in the news during that time. ‘Boys In Action’, a rocker from their debut album is next, followed by a rousing version of the rhythm and blues standard ( Get Your Kicks On ) Route 66. Closing the album but absent from the track list is a song called ‘Piss Party’. You’ll just have to buy the album for that one!
Unless you were able to get a copy of the recorded broadcast, this album wouldn’t be released in its entirety until 2000. That, to me, is a shame because it would’ve rivaled any of the classic double live albums from that era.
Brendan Harkin and Pete Sweval would depart soon after this, and by 1980 Starz would call it quits. They would however reform a number of times over the years and still continue to play concerts to this day. 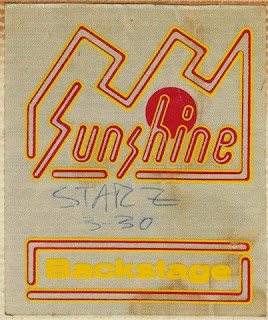 Photo courtesy of Susan Mayhugh. Used by permission.
Very special Thanks to Susan Mayhugh for the use of her photos and her contributions to this article. She is a dedicated Starz fan and an attendee of the Live In Louisville shows.